11-year-old Singaporean signs up to race in Legion of Racers Online League 2020. 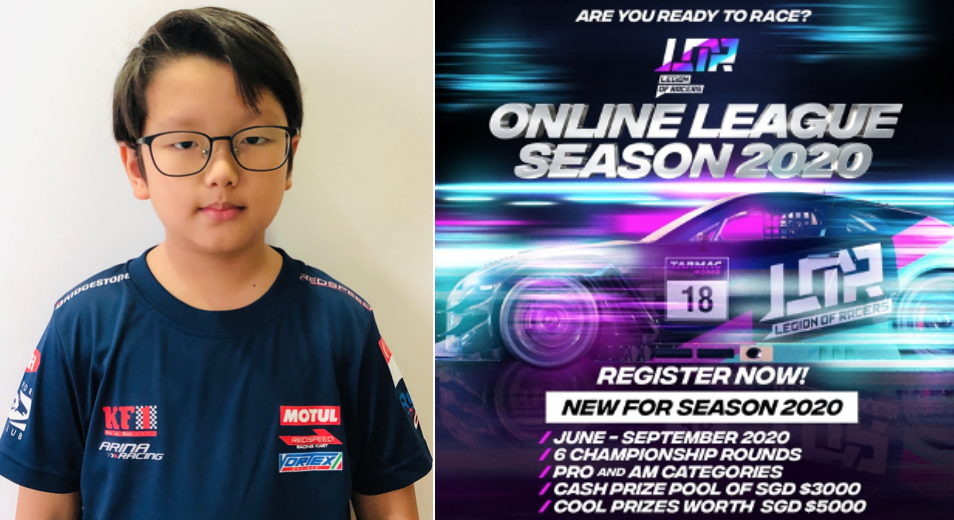 An 11-year-old Singaporean will be the youngest participant in the 2020 Legion of Racers Online League season which begins on 12 June.

The youngster – Regis Tay – has signed up in the amateur category and will be up against 43 other simraecers so far.

Apart from the amateur simracers, the LOR has also received another 22 entries for its professional category, including Josh Purwien who is its latest big name edition for the competition.

Said Tay, “I got started on simracing when I was picked to race against Lando Norris at the Marina Bay Sands in 2019. My father motivated me to start racing and I am very thankful to him. I got to know about the Legion of Racers when my dad told me about the Friday Night Runs and I hope to be a champion in simracing and a real life kart driver someday.”

27 of the 43 amateur simracers who have signed up are from Singapore.

In the pro category.  Australian Purwien is one of the most recognised speed demon simracers on the circuit and he joins Hong Kong simracer Jonathan Wong and 20 other pro simracers who have signed up for the season.

Purwien, a native of Perth who started simracing in March 2017, took the winners podium at the McLaren Shadow Race to Singapore 2019 competition and was also the youngest ever finalist at the subsequent McLaren Shadow Grand Finals, where he finished in fifth position. He also ended in third spot at the eRacing Grand Prix Southeast Asia Global Edition recently, a competition which was won by Singaporean LOR athlete Ar Muhammad Aleef.

Said Purwien, “I am really excited to participate in the 2020 LOR Online League season. Gran Turismo is a very fun game that I have never competed in professionally so I am interested to see how I compare to some of the world’s best. I am looking forward to Round 1 on 12 June!”

Aside from Purwien who is from Australia, the other pro racers who will line up on the grid include simracers from Singapore, Portugal, Indonesia, Philippines, Thailand, Malaysia, Hong Kong and Macau. There are 13 simracers who are between the ages of 17 to 24 and also includes 48-year-old Rui Pereira, a pro simracer from Macau.

The total of 65 entries so far for the LOR Online League season 2020 is double the number of entries from 2019. Pro and Am simracers who wish to be part of the 2020 season will have another two weeks to sign up before entries close ahead of the season opening race on 12 June.

Said LOR co-founder Melvin Moh, “We are ecstatic that there has been a phenomenal jump in the number of participants for the Legion of Racers Online League season 2020. With simracers like Josh Purwien and Jonathan Wong starting on the grid, we can expect excitement and keen competition over the course of the competition.”

The LOR’s Online Season 2020 championships which will rev up from 12 June onwards and simracing enthusiasts who are keen to take part can still sign up at the LOR official website at www.legionofracers.com/loronlineleague2020.