Reunion for Alam Shah and Ridhuan Muhammad at Tanjong Pagar. 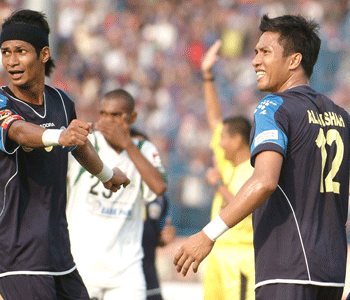 After ending their return season in 2020 with a wooden spoon, the only way has to be up for Tanjong Pagar.

For the 2021 season which is expected in start in February, the team led by former national midfielder Hasrin Jailani and managed by Noh Alam Shah have now signed up two of their team-mates from the 2004 Tiger Cup winning side.

Over the last few weeks, the Jaguars have snapped up former national striker 35-year-old Khairul Amri, and then went on to convince 36-year-old Ridhuan Muhammad to step out of retirement for one final hurrah.

Ridhuan’s signing means that he will now link up with his team-mate from Arema Indonesia – Noh Alam Shah.

Both players played together for Arema in the Indonesian league from 2009 to 2011.

Explaining his return, Ridhuan told the Straits Times, “I’ve missed it (football) so much and this is really a dream come true, to be able to say that I am going to be playing pro football again.

“I have always felt that I did not quite leave on my own terms… I never thought I would get the opportunity again and to be honest, I did not see it coming. But now that I have signed with the club, I want to do all I can to have a great season with Tanjong Pagar and help the young players in the team with my experience.”

Added Noh, “”I went to see him in December and he was talking about how he had watched the Michael Jordan documentary and he felt that he still had it in him to give it one last go and I thought, if he has the desire, why don’t we give him an opportunity?”