FAS president Lim Kia Tong seeking new mandate for another 4 years, says he has the stature and wisdom to lead for another term. 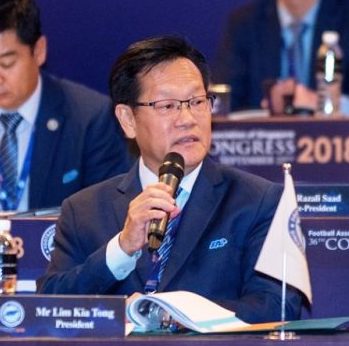 Football Association of Singapore (FAS) president Lim Kia Tong is keen to lead the football body for another four years.

On the sidelines of a media conference at the Jalan Besar Stadium held on 2 March, the 68-year-old lawyer also confirmed that the FAS elections for office bearers will be held before April 28.

In quotes carried by the Straits Times, Lim said, “I still have a very strong passion to serve Singapore football, and to make sure that it grows to at least to some stable, reputable extent, so that the next generation of leaders in this game can bring Singapore football forward.”

He added that he strongly believed that he had “the stature, the connection, experience and the wisdom to help for at least another term.”

He also said that his slate of candidates on his team had not been finalised.

Lim and his current team were voted in to the FAS leadership in 2017, handing a team led by Hougang United chairman Bill Ng a 30-13 defeat by the affiliates.

His Team LKT’s manifesto when seeking office in 2017 can be found here.