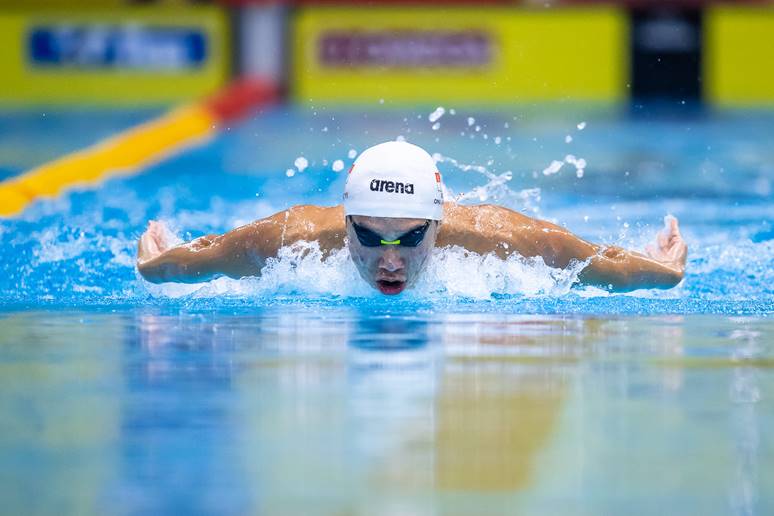 Dedication and perseverance towards his craft finally paid off for Chinese Swimming Club’s (CSC) Ong Jung Yi, as the butterfly specialist broke his own personal best set in 2019 in the Men’s 100m Butterfly on Day 3 of the Liberty Insurance 51st SNAG Major Games Qualifier on 19 March at the OCBC Aquatic Centre.

The 20-year-old National Serviceman was first in a time of 53.07s, ahead of AquaTech Swimming (ATS) pair of Teong Tzen Wei, who finished second in 53.35s and Jonathan Tan, who was third in 54.05s.

Ong’s time was good enough to see him seal qualification for the upcoming SEA Games in Hanoi this year and meet the Olympic Games “B” cut timing of 53.52s.

Also meeting the Olympic Games “B” cut was Teong.

“I feel really happy that I was able to achieve this, with the SEA Games A cut and the OG B cut.

“Especially as I have not actually made a Personal Best time in two years.

“Honestly, I was not really thinking about how the qualifying times were today. I was thinking more about my great grandmother, who is currently in the hospital”, said Ong.

Juggling between National Service (NS) commitments and training, the butterfly specialist was delighted with his progress since the Singapore National Olympic Qualifiers last December.

He said, “It’s definitely encouraging because with another three months leading up to the final qualifier in June and I am really optimistic that I will be able to try and step up my training with my coach to the next level, so that I can see if I can try to push my time to the Olympic A cut, the 1.56 mark.”

Also sealing her place in Hanoi was Singapore’s breaststroke specialist, Christie May Chue.

SEA Games 2019 Bronze Medalist, Lionel Khoo of ATS, could only finish second in the Men’s 100m Breaststroke final, as he was pipped to the wall by Maximillian Ang of Aquatic Masters Swim Club (AMSC), with Ang touching home first in 1:02.43s, and Khoo second in 1:03.11s. Singapore Swimming Club’s (SSC) Nicholas Cheong was third in 1:04.43s.

After setting a new National U-17 Record in the Men’s 100m Backstroke, 16-year-old Gabriel Koo of Aquatic Performance Swim Club (APSC)  was back at it again in the 200m Backstroke final, securing a SEA Games “B” cut after touching the wall in 2:05.06s.