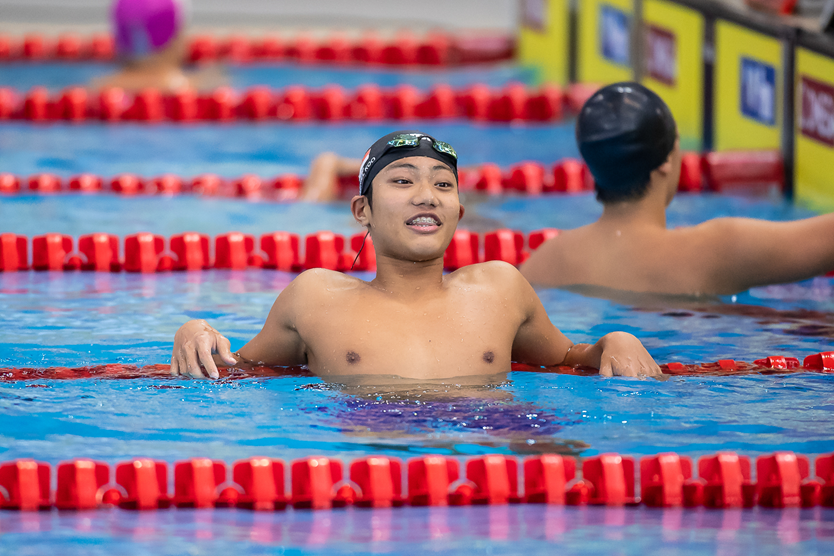 A National U-17 record that had withstood challenges for eight years finally fell on the second day of finals at the Liberty Insurance 51st SNAG Major Games Qualifier at the OCBC Aquatic Centre on 18 March evening.

Donovan Lee of AquaTech Swimming (ATS) was second in a time of 57.48s, and Jeremy Kemp of UWCSEA-East was third in 57.57s.

“I’m feeling happy right now and feeling very thankful for the opportunity to break the record.

“It’s a 8 year record and I am pretty honoured to have the chance to have my name up there with Zheng Wen”, said Koo, who is the younger sibling of swimmers Dylan Koo and Jamie Koo.

Koo added, “My main goal for this competition was just to improve my timings with everything that went on last year.

“I just wanted to regain the confidence that I had in myself.

“For the future, I hope to qualify for SEA games, of course, and hopefully get a medal.

“The SEA Games for this year is in my sights. Looking ahead, and the rate that I am going, the Olympic Games is going to be a long-term goal for me.

“But I am not going to limit myself and say that I cannot do it. I’m just going to continue training and hopefully one day I will get there.”

In the Men’s 50m Breaststroke, defending SEA Games champion Lionel Khoo, from ATS ensured that he will be back later this year in Hanoi to defend his crown when he clocked a time of 28.45s to clinch gold.

Nicholas Cheong of Singapore Swimming Club (SSC) secure silver with a time of 28.85s and Maximillian Ang of Aquatic Masters Swim Club (AMSC) held on to bronze in 28.89s.

“Looking at competitors and where I am at right now gives me a good sense. Looking back at where I was at the same time, back then in 2019 in SEA games.

“This time in 2019, I think I was doing well with swim times. I think we should be on track,” said the 26-year-old when asked about defending his title.

He added, “I’m glad to know I am getting back in form. It was quite a long period of time for us to be off the water, so I mean, I am even more thankful for opportunity to race. Cause not everyone in the world has the same opportunities right now.”

In the Women’s 200m Freestyle, there were SEA Games “A’ cuts for both Christie May Chue of Chinese Swimming Club (CSC) and Gan Ching Hwee of Swimfast Aquatic Club (SAC).

To round off the night, an impressive swim by 19-year-old Glen Lim saw him clinch an Olympic Games “B” cut, along with a SEA Games “B” cut, after winning the Men’s 200m Freestyle.