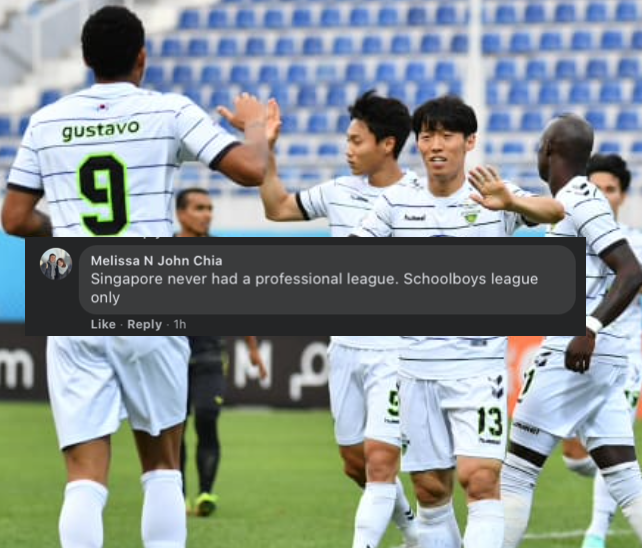 While it was expected that Tampines Rovers would lose to Jeonbuk Hyundai Motors in their Asian Football Confederation Champions League clash, it was the final 9-0 scoreline which brought out the online angst against Singapore’s only representative in the competition.

And fans took to the Stags’ own Facebook page to vent their frustrations, with its photo post of the result already being shared more than 110 times as at 10am on 2 July.

Here’s a sampling of some of the comments, which were not too vulgar and demeaning.

Some felt the scoreline was not unexpected, and opined the the difference was just too stark.

Some felt that the tournament was a waste of time for the Stags, which was strange, since fans should be celebrating that their club had qualified and was playing in the Champions League.

Would the same fan feel the same way if Tampines Rovers was drawn to play Manchester United in the European Champions League?

Afterall Jeonbuk Hyundai are champions pedigree in this region, and had won the trophy twice – in 2006 and again in 2016.

Then, there were all fans who harked back to the old days when Tampines Rovers were stronger.

But it is quite obvious that some fail to recognise that this was Tampines Rovers’ first appearance in the competition.

Only Singapore Armed Forces FC had represented Singapore in the Champions League previously, in 2010.

Of course, we would have the customary fan taking a dig at the Goal 2034 ambitions.

But there were also a couple of fans who could decipher that the gulf in standards was just too stark.

Some offered some suggestions.

And some just wanted to get the opportunity to say what’s been on their mind, with the result a manifestation of their thoughts

Stags coach Gavin Lee told the Straits Times that the result was on him, and the players should be spared the arrows.

“It’s not the players’ fault. They gave their best but we saw the big gulf in quality between both sides.

“The result is on me.

“It’s a good eye opener in terms of the difference in levels between us and the best teams in Asia but we need more matches at this level because the more we have it, the better we will become.”

The Stags will face off against Jeonbuk again on Sunday, and yet another hiding is expected.