When the post-match interview becomes the talk of the town. 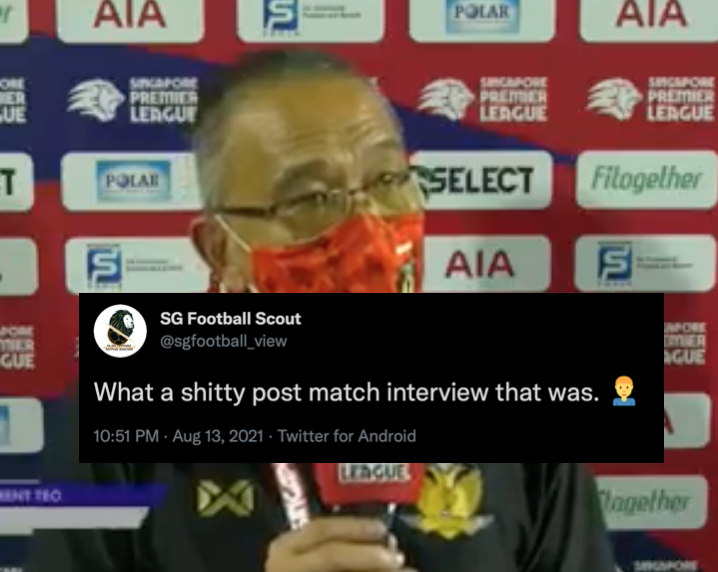 The news point was that Albirex Niigata gave Hougang United a jolly 4-1 smacking at the Jurong East Stadium to maintain their position at the top of the Singapore Premier League standings.

But the chatter going around social media spaces isn’t so much about the match, the result and the impact on the league standings.

Instead, a post-match interview of Hougang United coach Clement Teo conducted by a ground crew after the match is making its rounds on social media.

The interview was conducted right at the end after both presenters Collette Wong and Rhysh Roshan Rai cut to the ground crew for a few words with Teo.

The interviewer, who was not identified in the video but was only referred to as Stanley, appeared to be tongue tied when trying to pose questions to Teo.

After the first question, when Teo was asked ‘do you think you deserve more from this match?”, the Hougang coach first looked away for a while.

He then looked to the ground instead, probably thinking of what to say.

He then said, “Nope, we don’t deserve anything.”

Stanley then appeared apprehensive and unprepared for the response by Teo, who stared him down.

Stanley also got his tongue twisted when trying to pronounce incident when asking the following question, about whether Hougang could gave gotten a decision from the referee in the second half.

Teo, again looked away for a second, before responding by saying that he was not there to judge the referee, but was there to “judge my players.”

Sports journalist and co-founder of the Final Whistle podcast Deepanraj Ganesan called it an “embarrassment” on Facebook.

“Why do we continue to settle for such standards? And then you turn around and question the lack of support.”

On Twitter, @Mohamedkhabir, also a Final Whistle podcast co-founder said, “I’m not one to kick a man earning his money.

“He probably was thrown off because he wasn’t even supposed to be there doing interviews.

“But take him out of the equation and the result will be the same. It’s not like this is only happening today.”

In an earlier tweet, he asked, “Is that the best we got?

“It’s time we give the league the respect it deserves by getting the right people to do these interviews.

“What happened to Farrah and the crew that used to do the pre and post match interviews?”

A former Football Association of Singapore staffer had another perspective though.

To be fair to Stanley the interviewer, he did not seem to be nervous or tongue tied for that matter in the pre-match interviews with both coaches.

Maybe he was worried about Teo’s reactions to the heavy 4-1 defeat by the White Swans.

The Cheetahs are now eight points away from the league leaders Albirex Niigata.