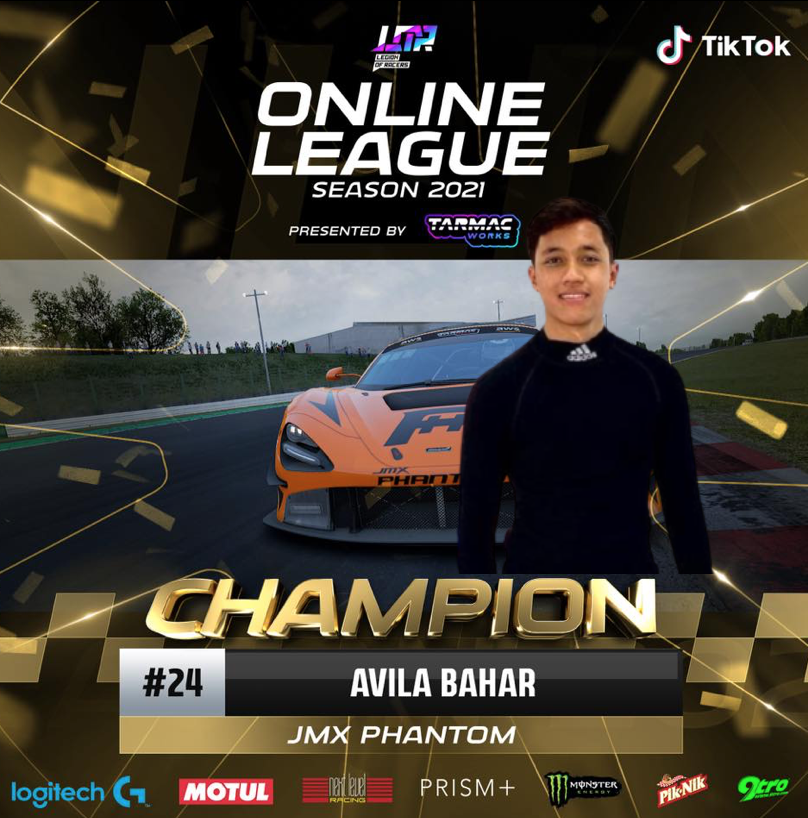 Indonesian Avila Bahar from JMX Phantom has won the Legion of Racers (LOR) Online League Season 2021 Presented by Tarmac Works after claiming victory in Round 5 at the legendary Suzuka Circuit in Japan.

He beat team-mate Fadhli Rachmat and Nigel Chuah from Tarmac eMotorsports to the Championship Title.

With 11 points separating Avila and team-mate Fadhli going into the race, Avila only needed to finish behind Fadhli to ensure his title win.

With both JMX Phantom drivers locking out the front row, it was the perfect scenario for Avila.

The Indonesian driver started the race in second position behind team-mate Fadhli Rachmat but was already in first place after the start and held his position throughout the 30-minute race.

Fadhli, on the other hand was punted off by countryman Arwin Taruna on Lap 1 heading into the second Degner, which destroyed his hopes of fighting for the win.

It was also fairly tight in the AM category, as Gugun Wiranto from Javasim claimed the AM Title by only 10 points followed by Fikri Azka and Gerald Lim from Singapore.

Gugun did not have an easy race as he was involved in an incident in Lap 1, but his seventh-place finish in the AM category was enough for him to claim the title with his rival Fikri Azka only finishing in front of him.

Indonesia won the Nations Cup title with a healthy points lead, proving that the country has many talented Sim Racers in its bank.

Avila Bahar from JMX Phantom, who walked away with a cash prize of SGD800 and prizes from Logitech said, “It’s been a great journey to compete in Legion of Racers Online League Races, and very proud we won the National Cup.

“This league shows great competition from many countries and it makes me more motivated to be more consistent.

“For me great competition, great rivals, mentality and attitude will make us better drivers.”

The 2021 edition of the LOR Online League was the fourth since the inaugural competition in 2018.

Melvin Moh, co-founder of Legion of Racers said: “It was great to see so many drivers in the league from different countries and I would like to thank all of them for their participation.

“With every year, the quality of the competitors and the races have been getting better.

“The league has brought many top drivers around the region together and we can’t wait for the next season already!

“I would also like to take this opportunity to thank all the sponsors and partners for supporting the league, as we could not have done it without them.”

The LOR Online League Season 2021 Presented by Tarmac Works may have ended but Legion of Racers will be announcing another upcoming race shortly, to be held in October.

Details will be released very soon.