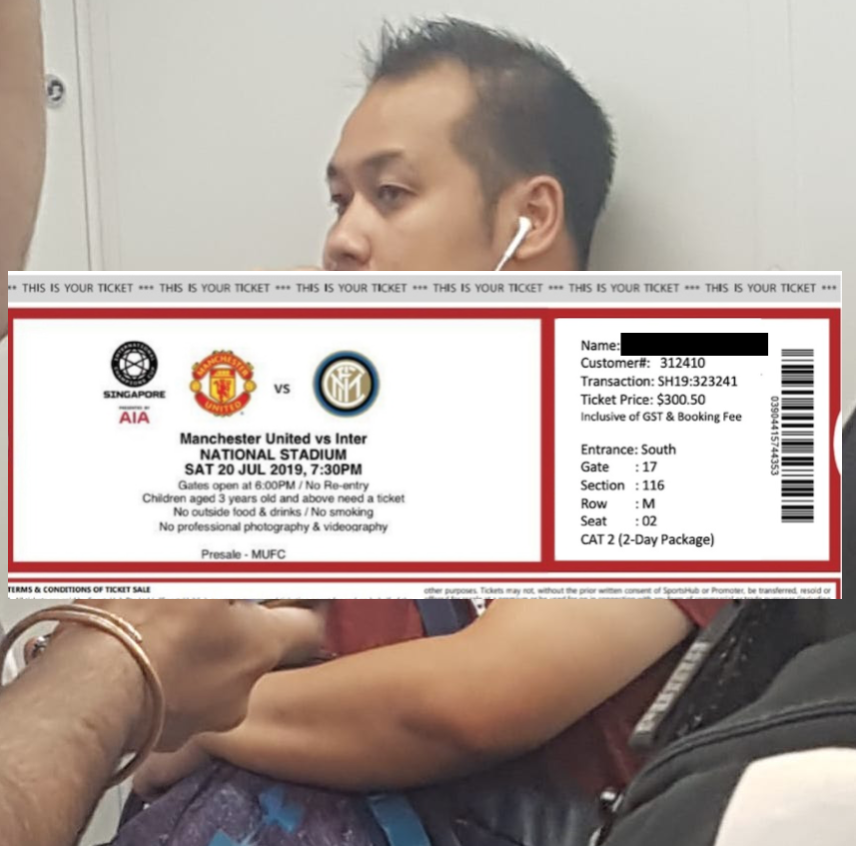 More than two years after police reports were filed against former sports agent Hafidz Jaafar for allegedly cheating several people with fake tickets to the International Champions Cup, there has not been any charges laid out against him.

And the various victims who were allegedly cheated by Hafidz are getting a little impatient and angry.

It appears that police investigations into the matter are still ongoing after more than two years, which has been confirmed by the Attorney-General’s Chambers in a letter to one of the victims.

In July 2019, several people paid for ‘discounted’ tickets from Hafidz for the Manchester United versus Inter Milan match which was held at the National Stadium on 20 July.

Hafidz had informed them that he had a friend at the Singapore Sports Hub who could provide discounted tickets.

See image of fake ticket which was sent to a victim by Hafidz.

When the scam was made public, the Singapore Sports Hub management reminded members of the public to only buy tickets from its official sources, and that it does not condone any ticket resale via non-authorised points of sale.

Tickets to the match aside, it is believed that Hafidz owes various people a total of about $35,000.

A WhatsApp chatgroup has also been set up which is made up of various people who have been allegedly cheated by Hafidz, who was a former communications manager with Singapore Swimming Association.

The participants in the chatgroup share updates on the case, or if Hafidz was spotted in public.

For example, when one of the victims spotted Hafidz on the train, he snapped a photo and sent a “Hafidz-Sighting” to the rest of the group.

TMSG has been told that at least two victims have written to Minister for Home Affairs and Law K. Shanmugam, asking for action to be taken against Hafidz.

One of the victims said that he met Hafidz at a Covid-management facility in August last year, who then told him that he was conned by a third party.

A story which the victims are not buying.

“He is a conman and has been cheating various people over different scams for many years,” said a source who knew Hafidz and his troubles.

“It is a wonder that he had not been hauled up before, but that was due to him having Godfathers to protect him for his indiscretions.”

Another victim who was cheated by Hafidz previously but who managed to recover his money said that Hafidz’s modus operandi was simple.

“He cheats friends and those who know him. He is basically a confidence trickster.”

A former communications manager with the Singapore Sports School, Hafidz was the spokesman for Joseph Schooling after the swimmer’s return from the 2016 Rio Olympics.

At one point, some people wondered if Hafidz and Schooling were fraternal twins, given you could not have one without the other.

He was sighted in most public appearances by Schooling, until he was fired by the family on 19 July, a week before the tickets scam surfaced.

Did you buy tickets from Hafidz Jaafar? Have a story for us? Connect with us at hello@themonitor.sg or follow us on Instagram.