Why 2012 was a year to remember for Mustafic Fahrudin and Singapore football fans. 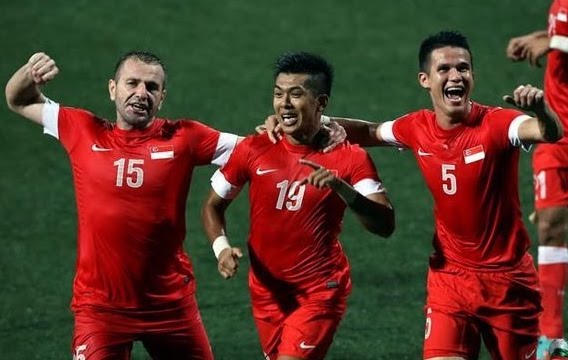 With Radojko Avramovic declaring that the 2012 Asean Football Federation (AFF) was his last in charge of the Singapore Lions, the competition in 2012 took on an added meaning for Singapore and the Lions.

Having endured sitting out the 2008 and 2010 finals of the competition after tasting success at the 2004 and 2007 editions back to back, there were sceptics who felt the Lions would again falter at the final hurdle.

But the Lions Class of 2012 had other ideas, given that Avramovic had given many of them their international breaks.

Recollecting what happened almost nine years ago, Tampines Rovers assistant coach and former Lions defensive midfielder Mustafic Fahrudin said in a video interview with TMSG, “Back then, building up to the Suzuki Cup group stage, people did not give us much chance because results didn’t go much in our favour.

“I remember we won just one game before we travelled to Malaysia in the group stage.

“We beat Pakistan in Singapore 4-0, that was a win after a long time.”

The Lions were drawn into Group B and had to play its round robin matches in Malaysia against the hosts, Indonesia and Laos.

On 25 November, the Lions pulled off the unthinkable.

“In the first game against Malaysia, it was a full house in Malaysia.

“That was a big game, we thrashed them 3-0,” Fahrudin beamed.

A brace by Shahril Ishak and a third by Aleksandar Duric silenced the capacity Bukit Jalil Stadium.

Even though the Lions lost their next match by a goal to Indonesia, they got three points off Laos in the final match in a nail-biting 4-3 finish, with the Lions having to pull a rabbit out of the hat after going down 2-0 within 40 minutes, and made the semi-finals.

In the semi-finals, the Lions had to come up against a Philippines which had stacked itself up with players from the diaspora like Paul Mulders and the Younghusband brothers.

The first leg at the Rizal Memorial Stadium in Manila was largely uneventful with both sides not being able to find the back of the net.

Four days later, a Khairul Amri strike from outside the box found its way towards goal at the King George’s Stand at the Jalan Besar Stadium and it was enough for Singapore to get itself into the flnals to face off against the regional arch rival Thailand.

Fahrudin gave credit to former national coach Radojko Avramovic for having moulded the Lions into an outfit made out of of believers.

“Raddy built in us that we knew we are good enough to compete.

“We knew Thailand is good but we are even better than them.”

Avramovic was already into his ninth year into the job as national coach, and was arguably Singapore’s most successful national coach having led the Lions to the 2004 and 2007 regional title prior to 2012.

He had also taken the Lions to the third round of the 2019 World Cup qualifying campaign, the furthest ever the Lions had progressed to, even till today.

The scenes at the Jalan Besar Stadium during the first leg still makes the hairs on the back of his neck stand out.

“It was amazing atmosphere, it was absolutely buzzing,” said Fahrudin.

“Jalan Besar is a small, wonderful stadium when it is packed to play.

“At that time we were lucky because they built another stand behind the goal posts which made it even more noise and more buzz.

“I remember when we walked in for the warm up you can feel the atmosphere.

“And they (the fans) really believed we could go all the way and we can win the Suzuki Cup.

“So they helped us a lot that night.”

Fahrudin went on to score a penalty which he had to take twice, and goals from Khairul Amri and Baihakki Khaizan gave the Lions a 3-1 lead as they headed to Bangkok for the return leg.

Despite losing by a single goal in the second leg, Fahrudin and his Lions secured yet another Suzuki Cup trophy for Singapore in 2012.

Singapore have not made the knockout stages since then but Fahrudin is hoping that with Singapore hosting the competition this year, the Lions will find a way to “make the nation happy again”.

Watch his interview with TMSG.