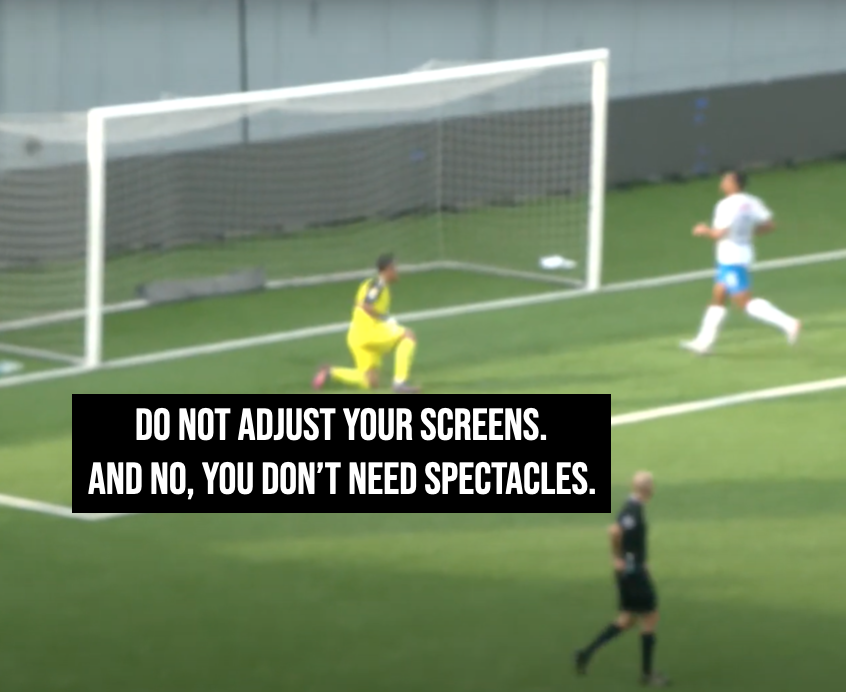 The main photo of this story is blur.

Absolutely blur, so there’s no need to adjust your screens just in case if you were wondering if it was an issue with your mobile phones.

Here’s another photo just to be sure.

Fans who watched this on the big screens at home suddenly wondered if they needed to get their cataracts removed.

And alas, this was what fans who watched the broadcast of the opening match of the 2022 season were subjected to.

In terms of broadcast quality, the 2022 Singapore Premier League season has begun the same way it ended in 2021.

Amateurish would possibly the one word to describe the broadcast for the AIA Singapore Premier League.

It has not been made public who is managing the broadcast of all matches this season, with the broadcast having been managed by 1 Play Sports for the previous two seasons.

1 Play Sports’ contract for the broadcast of the Singapore Premier League ended at the end of the 2021 season.

Broadcast of the opening match was also not available on Facebook, a norm over the last two seasons, but the opening Community Shield match between Albirex Niigata and Lion City Sailors was put up on YouTube and on Starhub and Singtel channels.

Camera angles were also questionable, with fans wondering if they were watching ants play at certain points.

Camera work aside, the quality of the commentary audio was scratchy.

So bad that even fans who watched on Singtel would notice a ticker at the bottom of the screen which pointed the audio problem back to the source where the footage was being received.

Apart from the issues with the visuals, the producer was also sleeping on the job for a bit with score details not being updated after the Lion City Sailors had equalised in the 41st minute.

A fan who noticed the mistake had an explanation.

So who was managing the broadcast of Singapore Premier League?

With every passing season, quality should be improving, in keeping with technological enhancements.

Not with the Singapore Premier League, unfortunately.