Tampines Rovers only informed of DC postponement 5 hours after finding out about it through a FAS media statement. 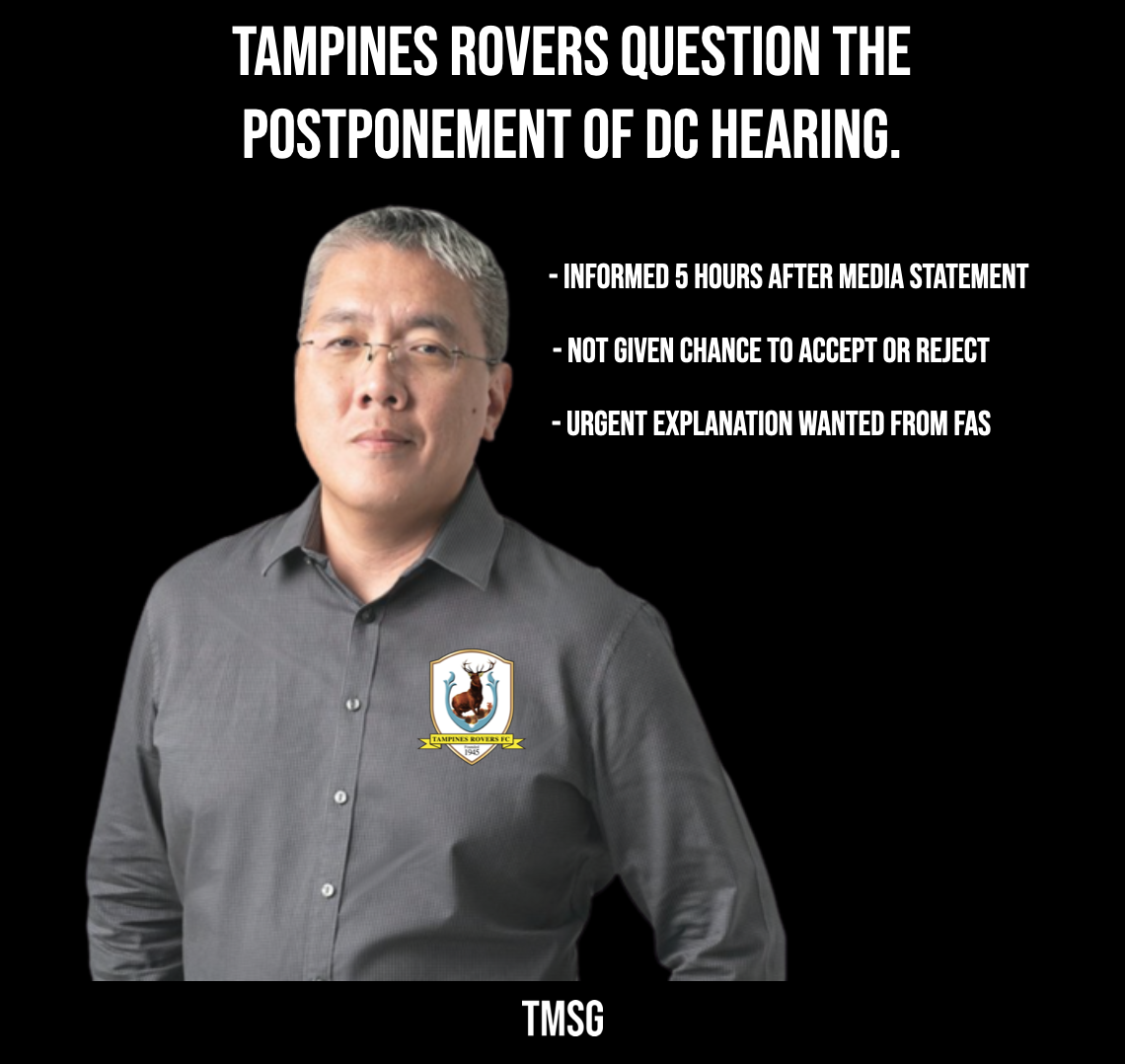 Tampines Rovers chairman Desmond Ong has relayed his shock at the way in which the disciplinary committee hearing involving both Lion City Sailors and Tampines was postponed suddenly.

He also added that the club only found out about the adjournment through a media statement by the Football Association of Singapore (FAS).

The club only received a notification hours later.

In quotes given to the Straits Times, Ong, who is a lawyer, said “leaving aside the merits of the application by Sailors to adjourn the hearing, we are shocked by the way the decision was communicated to us.”

“We were also not afforded the opportunity to accept or reject the possibility of such an adjournment.”

“Furthermore, we were not informed how or when Sailors communicated with the tribunal regarding the proposed adjournment as we were not made privy to such communication,” Ong told the Straits Times.

He added that his club had submitted all requirements by Wednesday evening as requested by FAS.

The FAS media statement was issued at 3.44pm and the club only received an email notification at 8.05pm on Wednesday.

Coincidentally, the Lion City Sailors celebrated the official opening of the training academy at Mattar Road on 28 July, the day the disciplinary meeting was due to take place.

The DC had been convened after the ill tempered match between Lion City Sailors and Tampines Rovers on 24 July, in which Sailors coach Kim Do-hoon was seen headbutting Tampines Rovers assistant coach Mustafic Fahrudin.

Fahrudin was photographed throttling Kim’s throat after the match had ended.

The news has since made its wound around the world and was carried by prominent Korean media outlet Korea Joong Ang Daily.

The Tampines Rovers chairman added that the club has sought an urgent explanation from the FAS over the matter.

In response to queries at the launch of the training centre, Sailors chief executive Chew Chun-Liang said that the Sailors appreciated the decision by the FAS to “allow us more time to examine the evidence arising from our internal investigations that include identifying and interviewing witnesses, as well as gathering video and photographic evidence.”

The adjournment of the disciplinary hearing will mean that Kim will be able to remain in his technical area for the match against Albirex Niigata on 29. July.

Indeed, there is something about the way this hearing is being managed which stinks somewhat.