Standard Chartered Singapore Marathon prize money drops from more than $300,000 in 2019 to only $70,000 this year. No prize money for Singaporean elite runners? 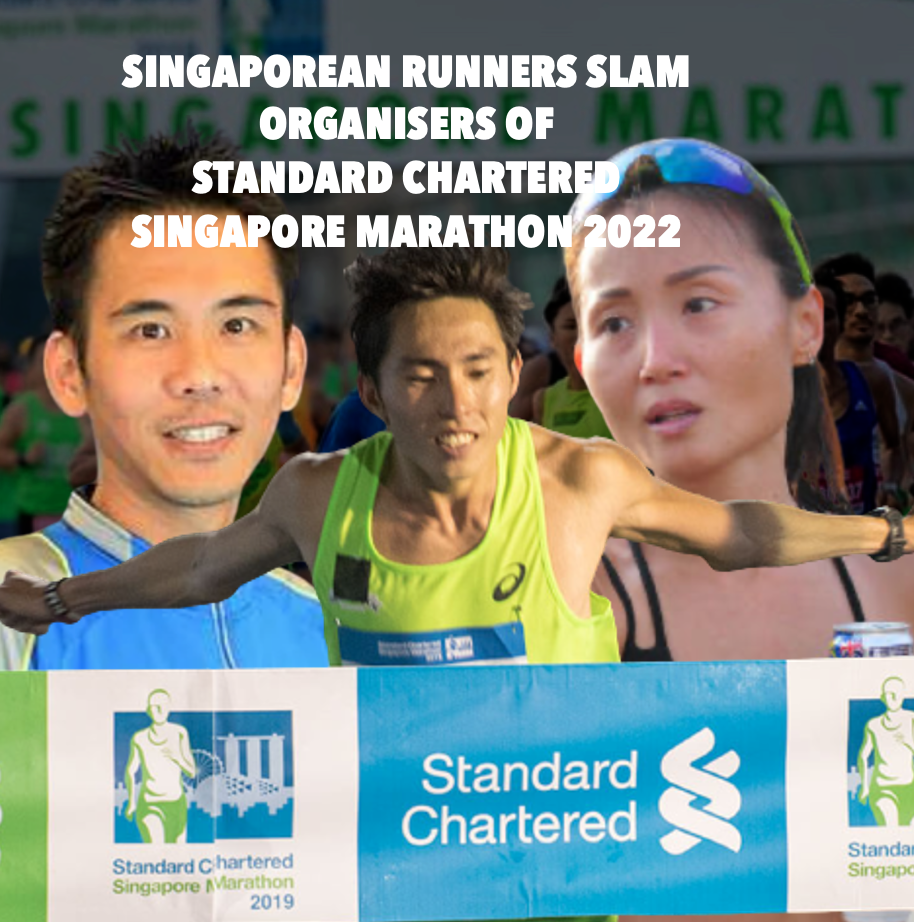 Elite Singaporean marathon runners are up in arms after the organisers of the Standard Chartered Singapore Marathon (SCSM) 2022 have removed the Singapore winners categories from this year’s races, known within the running fraternity as the National Championships.

The SCSM 2022 happening between 2 to 4 December will be the first “full road race” in Singapore since the pandemic put a halt to such races in 2020 and 2021.

The SCSM 2022 is not being labelled as an elite label event, but is just a “label event”.

TMSG also understands that the negotiations for the race to be sanctioned by Singapore Athletics is still ongoing, with the sanctioning fee to be paid to the athletics body still yet to be confirmed.

Why the organisers decided to go ahead and open registrations before the sanctioning was approved or confirmed by Singapore Athletics is unknown.

When contacted, Singapore Athletics General Manager Leon Lim said that the athletics body is still in negotiations with Ironman Group over various matters, including the sanctioning of the race.

“This also includes prize money for the Singapore elite runners as an incentive,” he said.

A full list of the winners and all categories can be found here.

This year, the male and female winners of the full marathon will earn only S$10,000 each.

There are no elite Singapore categories, Masters or wheelchair categories announced as of yet, which has upset Singaporean elite runners.

WHAT THE ATHLETES SAY

The winner of the elite male category for three years on the trot in 2017, 2018, and 2019 was Southeast Asian Games gold medallist and Singapore marathon record holder Soh Rui Yong.

Said Soh, when contacted, “A number of local runners have spoken to me about the prize structure and while we are happy that the Standard Chartered Singapore Marathon is finally back this year, it is sad to see that the race seems a shadow of its former self.

“With no incentives for the locals and masters runners, I think many runners searching for a good performance would have less reason to do SCSM and they would go overseas to a December marathon such as Valencia Marathon to race a good time in perfect (cooler and less humid) weather conditions instead.”

Soh also added that many local runners “thought it was weird to open registrations in July before the prize structure was only announced last week.”

“This led to some runners registering for early bird assuming the prize structure was the same as in 2019 and now they realise the prize money has been cut significantly but have already paid money for registration.”

The point made by Soh was also confirmed by 2018 local women’s winner Lim Baoying, who later relinquished her winners’ medal due to the consumption of a controlled drug.

In response to TMSG’s queries, she said, “The Standard Chartered Singapore Marathon is the first major local marathon race after the pandemic.

“That the organisers removed the Singapore national categories and not consult Singapore Athletics over it just shows a great deal of disregard for the Singaporean runners.”

Lim (photo below), who is set to run her first race after facing a ban following the SCSM 2018 for the consumption of a controlled substance, had bought her slot when the registrations opened on the assumption that there would not have been any prize structure or other major changes compared to the SCMS 2019.

Similarly, 2019 male Masters winner Andy Neo booked his slot when registrations opened and was shocked when the prize structure was announced by the organisers on 8 September.

“The organisers are expecting the local runners who are non-professionals to compete with the international elite athletes for the same pot of prize is just unfair,” he told TMSG.

“The organisers have been asking for support from the local running community for the event and this isn’t the way to earn our support and trust.”

The SCSM is organised by Ironman Group.

When the prize structure was announced, Santoz Kumar, Ironman Group’s general manager of Singapore said, “With a $70,000 prize purse for the fastest marathon and half-marathon runners, we hope to ignite the competitive spirit of all participants – from recreational to the elite – to always look towards challenging themselves.”

On the official website, it is said that the SCSM is the leading mass participation run and only World Athletics Gold Label race in Southeast Asia.

The SCSM 2022 will be the first full road race since the unforgettable 2019 event, which made the news for the massive traffic congestion caused due to the main race being held in the evening.

The 2020 edition was staged as a “hybrid race format” due to the coronavirus pandemic and the 2021 event marked a return to in-person running with 4,000 people flagged off in waves of 50 to ensure safe distancing.

If you have an opinion about this story, write to us at hello@tmsg.sg and we will keep the conversation going.