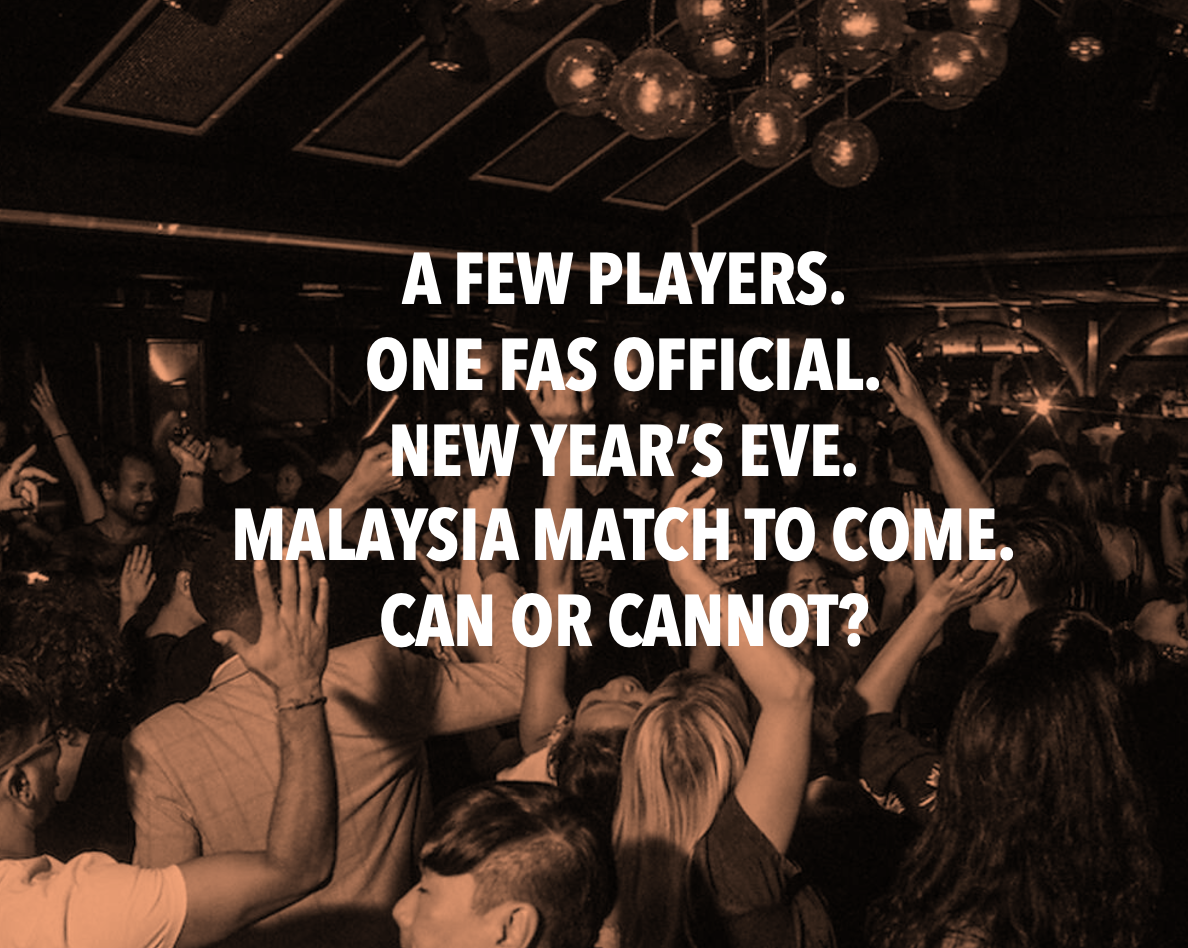 It was New Year’s Eve and Singapore’s footballers, who were holed up at a hotel at the outskirts of the business district with the final and crucial ASEAN Football Federation Mitsubishi Electric Cup clash against Malaysia in Kuala Lumpur on 3 January to come.

Only problem is that a few of them were spotted at a local club as Singapore prepared to usher in the New Year.

Worse still, also in their presence was a Football Association of Singapore (FAS) official.

TMSG has decided not to name the players or the official involved.

The said FAS official has since confirmed with TMSG that he was with the players that night.

A few questions which arise from the revelation.

Were the players out that night in their own free time?

Were they given permission by Lions national coach Takayuki Nishigaya to hang out that night despite the team departing for Kuala Lumpur the very next day?

If permission was indeed granted by the coach for the players to be out that night, given that the Lions had a do-or-die fixture to look forward to, then what was the rationale behind his decision?

However, if it is true that the players were only allowed to have their personal time till 6pm on 31 December and that they needed to be in the hotel after that, then isn’t this tantamount to a curfew having been breached?

And right under the nose of a FAS official at that, who should have known better?

Reactions to the revelations that some of the players were out on New Year’s Eve have been mixed.

A few online commenters feel that given that the players should have been given the space to relax given the harsh training and competition schedule and also given that it was the eve of 2023, with many in celebration mode.

However, officials TMSG spoke to also point to the fact that such a move to allow the players out in the midst of a tournament was also risky, with the risk multiplied given the fact that hundreds of thousands of people had congregated at the city district to usher in the New Year.

“It is unlikely that any national coach in his right frame of mind would let the players out at that hour in the midst of a major competition,” said the official on condition of anonymity.

“If he did, then his rationale should be made public.”

Singapore’s national coach Nishigaya and the FAS should come clean on the matter, and if there are players who indeed broke curfew, then action will need to be taken and they should be named.

There needs to be accountability and transparency, especially since the FAS is surviving on public funds, and more money is being spent in developing football through Unleash The Roar.

Singapore were trounced 4-1 by Malaysia on 3 January, for the record.

Should the players be allowed to party if they had been following their training schedules? Write to us at hello@tmsg.sg