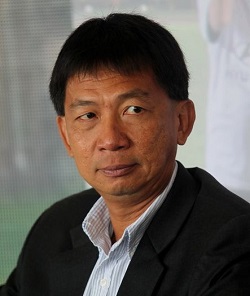 On 29 December 2016, the Straits Times reported that S.League Chief Executive Officer Lim Chin had been given a one year extension on his employment contract.

However, barely three days into the New Year and the Football Association of Singapore (FAS) dropped a bombshell in the evening of 3 January 2017 that Lim Chin would leave his post on 31 March 2017. Current S.League Director of Operations Kok Wai Leong will continue the running of the S.League after Lim Chin steps down.

Said Lim Chin, in his statement: “After helming the S.League for the past five years, I have decided that it is the right time for me to pursue other interests and opportunities.

“It has been an exhilarating ride season after season and I would like to sincerely thank all the club chairmen and general managers, as well as the club staff, coaches and players for their great support.

“I have enjoyed working with the FAS Council and my dedicated colleagues at the S.League. I will definitely continue to support Singapore football and hope all stakeholders will do the same as well.”

“Lim Chin thanked everyone except the fans and football club supporters. That’s probably why he did not perform in the job.” – football activist James Lim

Said Mr Lim Kia Tong, President of the FAS provisional council: “We have requested that Mr Lim continue in his role until 31 March 2017 to oversee the kick-off of the new league season and he has agreed to do so. The FAS Provisional Council will continue to work with our stakeholders and staff to further enhance the quality of our professional league as well as other aspects of Singapore Football.”

The statement did not state whether the S.League or the FAS would start the hunt for a new CEO to replace Lim Chin.

Responding to the news of Lim Chin’s impending departure, football activist James Lim said in a Facebook post: “Lim Chin thanked everyone except the fans and football club supporters. That’s probably why he did not perform in the job.”

Apart from his failure to revitalise the ailing S.League, Lim Chin will also be infamously remembered for the pole-dancing at the 2014 S.League Awards Night, where he was roundly booed by a section of the attendees.