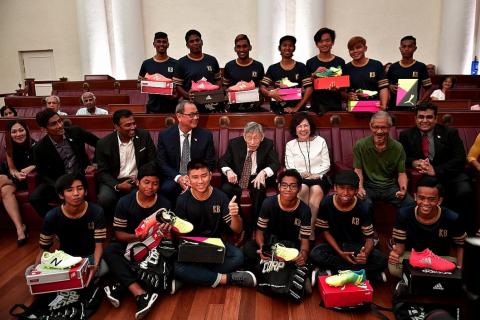 He served six terms as a Member of Parliament for Potong Pasir before venturing out to stand in a group representation constituency at the 2011 General Elections.

But despite being out of politics since 2011, the former Member of Parliament for Potong Pasir doesn’t look like he intends to slow down in wanting to help Singaporeans.

On 9 March, in the same Parliament Chamber where Mr Chiam first took his oath as an MP in January 1985, it was announced that he will serve the community in an all-new capacity – as a Patron of the Chiam See Tong Sports Foundation.

His wife, Mrs Lina Chiam, who served one term as a Non-Constituency MP from 2011 to 2015, is also a Co-Patron of the Foundation.

The objectives of the Foundation, with its tagline “We Believe in You”, are as follows:

Said Mr Chiam, who turns 82 on 12 March: “Our children are our future, and we must provide them with as many opportunities as possible, so that they will find many paths towards being successful, patriotic Singaporeans. Sports is a unifying tool for nation-building and in building strong community bonds. We must continue to find ways to work together as a community, and to continue having faith in our children, and in believing in them.”

The Board of the Foundation will be chaired by former national swimmer and one-time world’s fastest over the 50m freestyle Mr Ang Peng Siong and co-chaired by Mr Jose Raymond, who is currently a Vice-President of Singapore Swimming Association. Mr Ang’s father – Mr Ang Teck Bee – was Mr Chiam’s swimming coach in school while Mr Jose had previously posted how Mr Chiam had helped his family out financially in the 1990s.

On 9 March, Mr Jose posted a video just after the launch which has since been shared more than 200 times. The video chronicled his association with Mr Chiam which dates back to 1984.

Said Mr Ang: “This is a positive step for sports in Singapore. The aim of the Foundation is to find ways to help children achieve their sporting dreams, and to give them the added help. Sometimes, timely intervention can alter the course of one’s life tremendously and in more ways than one.”

Timely intervention and support is something which Mr U. K. Shyam would identify with. Singapore’s current record holder in the 100m sprints will serve as a Director of the Board. He said: “My years as a sprinter was always filled with challenges, especially from a financial perspective. I was lucky that I had people like Uncle Peng Siong and Jose around me who were always around to provide help. It is important to give our young children a helping hand when they need it most, and it is our hope that they become our national champions of the future someday.”

Added Camilla Chiam, the Chiam’s only daughter, who will serve as a Director of the Board: “My father always believed in using sports as a force for good. He held the tenet that one’s true character is reflected and on full display when playing sports, whether on a recreational or competitive level. Through the Chiam See Tong Sports Foundation, we intend to provide disadvantaged youths the accessibility to various sporting activities and in doing so, inspire them to discover their joy and passion while building strong life skills through sports.”

First female President of Singapore? It is looking more and more likely now.