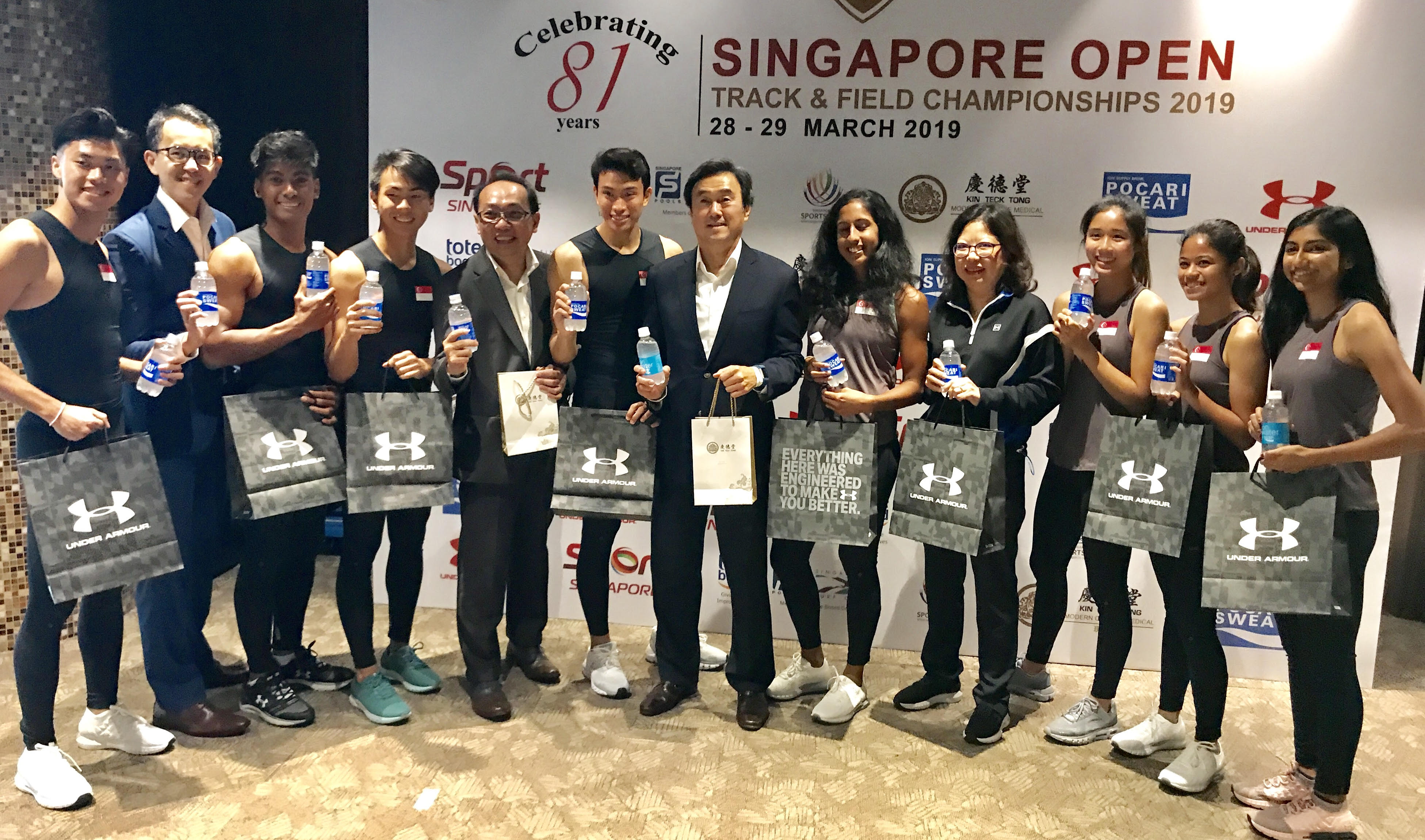 Singapore Athletics (SA) has signed up three key corporate partners as part of its commercial partnership programme to bring on board more supporting organisations into its fold.

Sports apparel brand Under Armour, isotonic drink POCARI SWEAT and traditional Chinese medicine experts Kin Teck Tong were announced as SA partners ahead of the Singapore Athletics Festival – the 81stSingapore Open Track and Field Championships and the National School Games Track and Field Championships Finals which will be held at the Singapore Sports Hub and Home of Athletics on 28 and 29 March.

Said Mr Tang Weng Fei, President of SA, “Building partnerships and bringing on board as many supporting organisations will be critical to the long term sustainability of all national sports associations.

“Singapore Athletics is no different, and we do rely on partnerships to keep us going forward, and in helping us achieve our performance goals. We are constantly on the hunt for new partners and hope to sign more such partnerships down the line.”

Of the three partnerships, Kin Teck Tong – is acurrent partner who is renewing their partnership agreements with SA while Under Armour and POCARI SWEAT are new partners.

Said Michael Binger, CEO of UA Sports (SEA) Pte Ltd: “We are honoured to lend our support to Singapore Athletics in its mission to grow the sport in Singapore.

“There is a lot of untapped potential in track and field in Singapore and we are glad to support and groom the next generation of talents in partnership with SA. Under Armour’s vision to make all athletes better and SA’s quest for performance are a perfect match.

As part of its partnership, Under Armour will be named SA’s Official Apparel Partner and will outfit all national team athletes at major games like the Southeast Asian Games, Asian Games, Commonwealth Games and Olympics and all other SA-sanctioned local and regional competitions.

Said Puspita Winawati, Country Manager POCARI SWEAT Singapore: “It is an honour for us to be a partner of Singapore Athletics. Having supported SA athletes achieve sporting excellence previously like Rui Yong breaking the national men’s marathon record at Seoul Marathon 2019 and Jie Shi preparing to represent Singapore during the 2016 Olympic Games Marathon event, partnering with SA allows us to develop more athletes to achieve their best performance through proper hydration. As a sponsor of this year’s SEA Games, we are also looking forward to continually supporting the athletes as they train and compete at the highest level during the games.”

Kin Teck Tong who will be SA’s Official Traditional Chinese Medicine Partner has two of its outlets at the Kallang Wave Mall and Jurong East which provides a convenient location for athletes to seek help in injury prevention or post-injury recovery support, if needed.

“It is an honour for us to be an exclusive TCM partner of Singapore Athletics to provide professional sports rehabilitation treatment to SA’ athletes. Our outlets in Kallang and Jurong will be able to provide immediate support to SA’s Athletes as and when they required.” said Freeman Tan, Chief Operating Officer KIN TECK TONG.

The partnership announcements were made ahead of the 81stSingapore Open Track and Field Championships which will be held at the Singapore Sports Hub and the Home of Athletics.

Almost 400 athletes from 14 countries are scheduled to participate in 40events over two days.

For Singapore’s participating athletes, the event will be an opportunity to meet the qualifying marks for the upcoming Southeast Asian Games in Philippines to be held at the end of the year.

Among Singapore’s athletes who are participating include Shanti Pereira who will be competing in the women’s 200m, and will be part of the 4 X 100m and mixed relay team, while the likes of Chinese Taipei’s Cheng Chao-Tsun current Asian record holder in the Javelin and Thailand’s Patsapong Amsam Ang 2018 Asian Games bronze medallist in the pole vault are also due to be in action at the National Stadium.

The final 2 days of the track and field events for the National School Games will also be held in conjunction with the 81stSingapore Open Track and Field Championships.

“It is our hope that our young track and field athletes are inspired not just by the National Stadium but by the presence of so many local and regional athletes in their presence.,” added Mr Tang.

Mr Tang also announced at the media conference that SA has had its funding from the national sports agency Sport Singapore restored. Funding had been halted for at least two financial years during Mr Ho Mun Cheong’s term as President of the association.

Entry into the National Stadium and the Home of Athletics for the event is free. Visit www.singaporeathletics.org.sg for the schedule of events and start list.