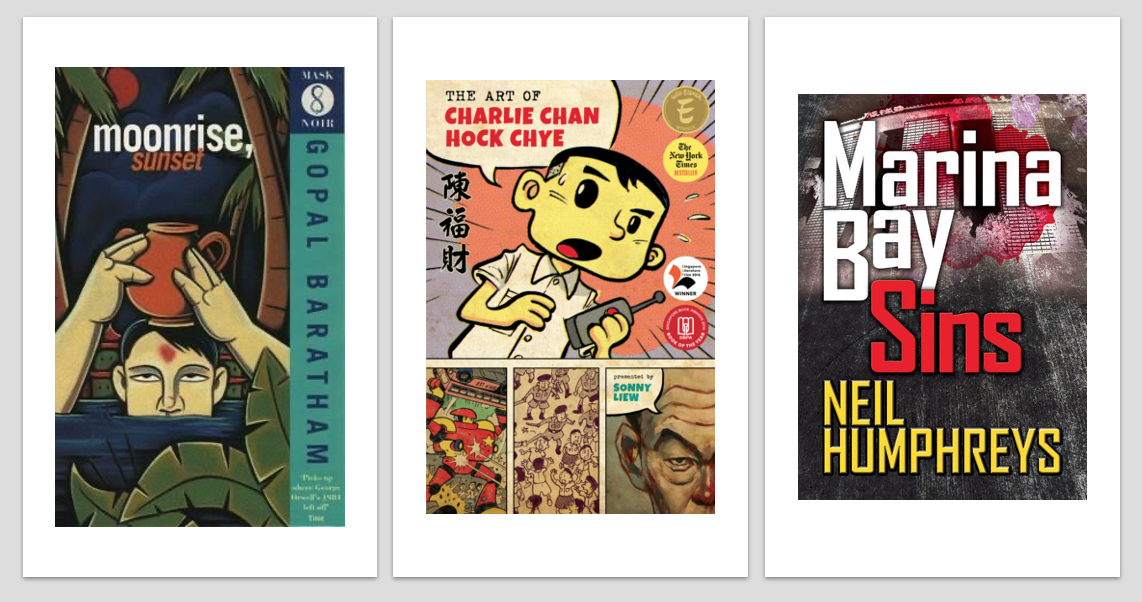 A trio of well-loved and renowned Singapore book titles is set to be adapted for television screens around the world.

Global media and intellectual property (IP) firm 108 Media announced that it has acquired the rights to some of Singapore’s best-selling and beloved books – The Art of Charlie Chan Hock Chye (Sonny Liew), Marina Bay Sins (Neil Humphreys) and Moonrise, Sunset (the late Gopal Baratham) – with a view towards financing and distributing these homegrown IPs as international animated and live-action television series that will be produced and shot in Singapore.

Headquartered in Singapore with key offices in Los Angeles, Toronto, Manila, London, Kuala Lumpur, and Tokyo, 108 Media is currently working with various producers, platforms, and talents to bring the literary works to the small screen with the titles expected to be produced and released in 2021 through 2022.

All works will be executive produced and overseen by 108 Media’s Abhi Rastogi (“Eerie” / “Frankie and Alice”) and Justin Deimen (“The Long Walk” / “Storm Boy”). Jeremy Chua (“A Yellow Bird” / “7 Letters”) will also creatively produce alongside Justin Deimen under the 108 Media banner for Moonrise, Sunset and The Art of Charlie Chan Hock Chye.

The books are all currently in active scriptwriting stage and are being packaged with actors and talent. The sales and financing of the projects are led by 108 Media’s capital arm across the United Kingdom and North America. Development of all the adaptations are being managed out of 108 Media’s London, Los Angeles, and Singapore offices by its development executives Richard Mewis, Matt Wilson, and Jeremy Chua, respectively.

Said Abhi Rastogi, Founder and Chief Executive Officer of 108 Media, “As an international media company in Asia, it is our mission to invest in the vision of creators, whether in Singapore or in other emerging markets. We specialize in taking local ideas global, and to bring the world into Asia. In the case of The Art of Charlie Chan Hock Chye, Marina Bay Sins, and Moonrise, Sunset, the teams are already hard at work, and it will only be a matter of time before they are viewed on screens everywhere.”

Added Justin Deimen, President of 108 Media, “Personally, as a born and bred Singaporean who has devoured all manner of local fare since young, I’m bursting with pride to be able to adapt the work of some of our country’s absolute best writers – and these books in particular – into different spaces and places around the world. I’m looking forward to showcase how truly global and terrifically vital our local creative scene is once the adaptations are released.”

The Art of Charlie Chan Hock Chye by Sonny Liew, a veritable masterwork in the pantheon of Singaporean literature and a global hit with multiple awards under its belt including the Singapore Literature Prize (2016), The Economist Book of Year (2016) and three Eisner Awards (2017) among many others, is being produced as a six-part half-hour high-end hybrid animation series garnering interest from platform partners across the North America, United Kingdom, Sweden, France and Germany for co-production and presales.

Ideating and re-envisioning the storylines from the iconic graphic novel is a writers’ room with exciting young Singaporean writers – Jow Zhi Wei, Jerrold Chong, Shelby Goh, and Roshan Singh – who have completed the multi-episode adaptation of the mock-biography of Charlie Chan Hock Chye, a fictional cartoonist, through his life during the early pre-independent days of Singapore to its present, all while the meta-narrative is punctuated with scenes and extracts of his comics depicting allegories of socio-political situations of an alternate Singapore through its history.

Said Liew, the multiple award-winning author of The Art of Charlie Chan Hock Chye, “Before 108 Media got involved, there were inquiries and interests from other companies and individuals as well to make a film or a series out of the book. But the biggest stumbling block was that no one could figure out how to adapt the book because it was not easy to adapt. The difference with 108 Media is that they have put together a team of screenwriters to figure out how to break down the book and make the adaptation work. That showed the level of commitment which 108 Media had invested into the process to take the book to the screens.”

Liew added that he was looking forward to how his award-winning novel would be adapted for the screens for audiences around the world – “On one level it is very exciting. Every time a book is put up on another medium, it is new and fresh. It is also a little bit scary because as a comic artist, I would have everything under my control. Whereas once you let it go into the world, it will change as it is adapted. Right now, I am excited about the process as it will be interesting to see how other people who get involved can see this through a new medium,” he added.

The prolific Gopal Baratham’s much beloved and controversial Moonrise, Sunset which was published in 1996, is being revived as a four-episode premium limited dramatic mystery thriller set in 1990s Singaporeabout a young Chinese-Indian man who wakes up next to his murdered fiancé and has to prove his innocence by uncovering the secrets left behind by his mysterious lover. Co-produced by Singapore’s Aurora Global Media Capital, the project is being angled for international markets with a view towards landing on global digital platforms, and is written by world renowned film critic and scholar Naman Ramachandran, who penned Netflix’s popular Sundance-competing “Brahman Naman”.

On the adaptation of Moonrise, Sunset, Sayana Baratham, the son of its author Gopal Baratham, who has been regarded as Singapore’s D.H. Lawrence, said, “I’m so thrilled and proud at the prospect of seeing one of Dad’s books being celebrated, and I’m sure he would be too. Dad’s writing is quintessentially Singaporean, and it will be fascinating to see his characters and vision of Singapore brought to life on screen. Almost 20 years after Dad died in 2002, this is a wonderful way to rejuvenate his work for a new generation of Singaporeans. I’m very grateful to Justin for believing in his work.”

The extremely popular Marina Bay Sins series of books is being adapted from 108 Media’s London office for an Asia-UK eight hour-long episode co-production called “Low” set in Singapore and London, with award-winning London-based Paris Zarcilla (Viu’s “The Century Egg”) show-running and writing the multi-season and highly commercial crime series centred around the irascible and roguish anti-hero Inspector Low who takes on the criminal underworld and sadistic serial killers alike all while battling his own personal demons. The two follow-up books in the series – Rich Kill Poor Kill (nominated for Singapore Book of the Year) & Bloody Foreigners – will be adapted as subsequent seasons for the series.

Singapore’s best-selling author and satirists, Neil Humphreys said he was ecstatic at the prospect of having his Detective Inspector Stanley Low, the bipolar protagonist in Marina Bay Sins series of books, be given new life as a TV character. He said, “I can’t tell you how excited I am that Inspector Low is going to be unleashed upon the world. Having lived with him inside my head for five years, I think it’s only fair that everyone else gets to see this uncensored, unstoppable misanthropic detective on screen,” said Humphreys, who is also one of Singapore’s most prolific writers and staunch environmentalists.

On the adaptation process, Humphreys added, “Adaptations change and evolve for different mediums and writers accept that. 108 Media wanted to work with me from day one, bringing in a writing and producing team and taking a brave leap from page to screen. It was of paramount importance to me that Low’s Singapore carried over to the screen. Thankfully, 108 Media agreed. They are taking  a Singaporean-Asian story to an International audience because it’s an honest Singaporean-Asian story. Luckily, 108 Media intend to do likewise with their gritty, visceral TV adaptation. Honestly, I cannot wait to see it and I couldn’t be prouder.”

Headquartered in Singapore, 108 Media is a fast-growing global intellectual property and media asset investment firm in the technology, media and telecommunications sector which aims to empower visionary creators in emerging markets. Its other productions include Eerie – a Philippines-Singapore blockbuster horror film, The Long Walk – a highly awarded Laos-Singapore feature film, and the in-preproduction Fluorescent Black – an eight episode adaptation of the cult-favourite graphic novel of the same name printed by Heavy Metal magazine that was ranked by MTV as one of the top graphic novels of the year, and listed by Publisher’s Weekly as the best Cyberpunk Novels of all time.