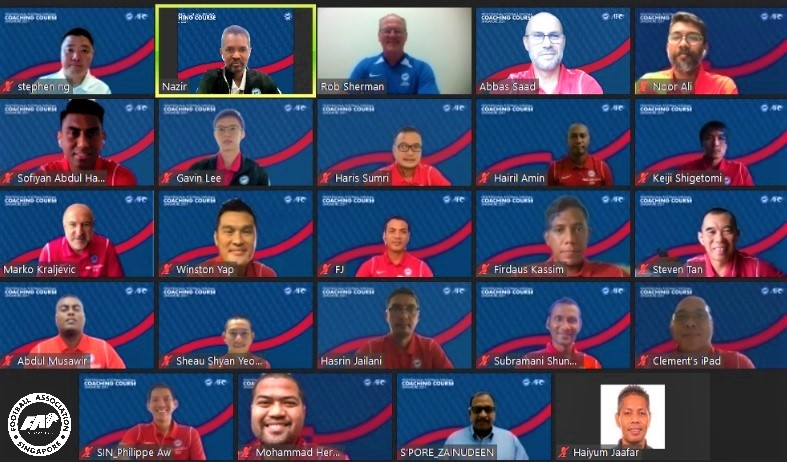 The first module of the Asian Football Confederation (AFC) Professional Football Diploma (Pro-Diploma) Coaching Course was successfully concluded earlier in the week, the Football Association of Singapore (FAS) announced on its website.

Initially scheduled to be held at the Jalan Besar Stadium on 17 and 18 May, the first of four modules was held virtually instead due to new Covid-19 restrictions imposed by the government last week

Seven head coaches of the 2021 AIA Singapore Premier League (SPL) were in attendance, as well as Yeong Sheau Shyan, the sole female participant and Abbas Saad, the sole non-local based attendee. The former Malaysia Cup winner with Singapore travelled from Australia to take part in this elite coaching course.

The second AFC Pro-Diploma course to be conducted by FAS since 2012, this course was attended by 19 participants – all of whom were required to hold an AFC ‘A’ Diploma for at least two years and be coaching at a Professional or Elite Youth level.

The course was helmed by Robert Sherman, who holds a UEFA Pro License, UEFA Level 5 Coach Education and has 43 years of coaching experience. He has also worked with the likes of Gareth Bale and Aaron Ramsey, and served as Technical Director at Wales, New Zealand and Australia.

Philippe Aw, Head Coach of the Young Lions, said: “I’m delighted that we managed to kick off the course amid the COVID-19 pandemic. As with the new normal, this phase of the course went virtual and it’s something we have been accustomed to for the past year. The contents delivered and experiences shared by Mr Rob Sherman was certainly insightful.”

On the successful conclusion of the course, FAS Head of Coach Education and Development, Mohamed Zainudeen Hassan said, “Due to the latest restrictions, we had to overcome challenges for the course to continue.

On 14 May, we decided to change the course from a physical one to an online one.

“I am glad that we still managed to complete the course despite all the limitations, together with the support of our FAS President, General Secretary and Technical Director.”