Why Singapore football has much to worry about. 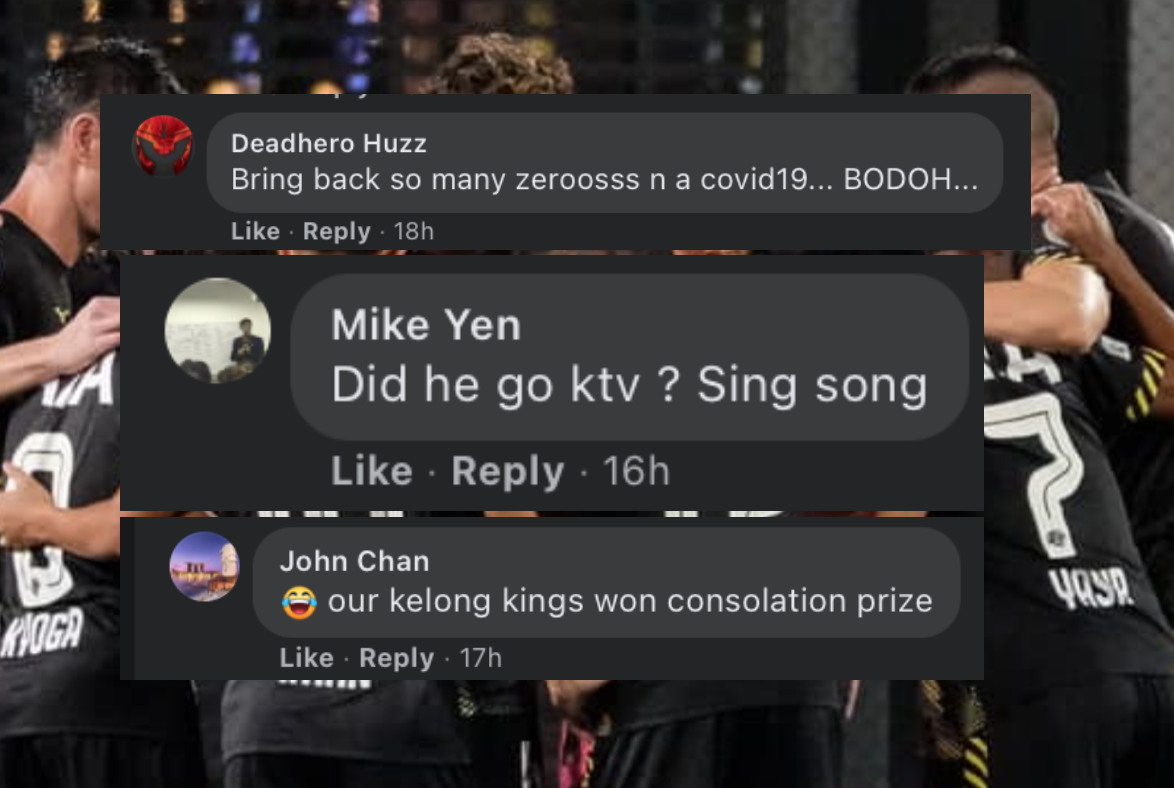 When a Tampines Rovers footballer was found to have been infected with Covid-19 upon return from Uzbekistan where the Stags were participating in their first ever Asian Football Confederation Champions League tournament, the reactions from netizens to the announcement only confirmed what has been a well-known fact.

Instead of empathy and concern, the team and the players were showered with comments such as these.

They took out their frustrations on the team for having lost all matches, for having conceded so many goals, and for failing to earn a single point.

Only a month ago, fans were also up in arms online in response to the Singapore national team’s performances at the World Cup qualifiers in Riyadh, where the team lost all matches against Palestine, Uzbekistan and Saudi Arabia.

What has caused fans to turn against Singapore football?

FAILURE AT MULTIPLE LEVELS FOR FAR TOO LONG

Since 2012, the Singapore national football team have failed to get past the group stages of the Suzuki Cup.

In 2014, the Lions could only beat Myanmar, and lost against Malaysia and Thailand.

In 2016, the Lions did worse and ended up with only 1 point and at the bottom of the table which included Philippines, Indonesia and Thailand, with the only point coming through a goalless draw against hosts Philippines.

In 2018, Philippines ended up ahead of the Lions and forced the Lions out of the competition again, with only wins against Indonesia and Timor Leste to show.

In addition, the Young Lions have failed to make the semi-finals of the Southeast Asian Games since 2013.

At the local level, Singapore fans have not been able to celebrate with a local team which has win the league.

See table below, with the teams on the right being the runners-up.

Shockingly, the last Singapore side to have been crowned champions of the local league was Warriors FC in 2014.

Needless to say, the Warriors are now no longer participating in the league after having to sit out both the 2020 and 2021 seasons due to financial stress.

Foreign sides Albirex Niigata and DPMM have been champions since 2015 consecutively which robs local fans of opportunities to celebrate with their local heroes.

While Albirex Niigata has done a formidable job of connecting with the Yuhua community, it is hard for local fans to identify with the White Swans, as much as they would with Tampines Rovers or Geylang International if and when they can emerge champions.

Apart from the national team and local league, the Young Cubs have also been found wanting in youth competitions.

At the Asian Football Confederation U19 qualifiers in 2019, the team conceded 21 goals in three matches, and did not score any.

One of the losses included a 11-0 thrashing by Korea Republic.

Since announcing a grand aspirational plan for Singapore to make it to the 2034 World Cup, the Football Association of Singapore has not provided any updates.

While a project director in the form of former Deputy CEO of the Thai Football League Ben Tan has been appointed, and with work ostensibly taking place behind the scenes with Sport Singapore leading the initiative and with funding, the public in general has been left to wonder about the progress of the project.

Have schools been approached as bases for the Football Academies? What has been the outcomes?

What happened to the naming competition which was supposed to involve the public?

So many questions but so very little answers and engagement, unfortunately.

Fans baulked at the racist undertones hoisted towards Marcus Rashford, Jaden Sancho and Bukayo Saka after England’s penalty miss and were quick to defend the trio.

But where were these fans when the Tampines Rovers players were being abused online when it was made known that one of their own was infected with Covid-19?

There is something seriously wrong with the national football culture when fans hit out at the very players who are trying to play and perform for club and country.

There are issues which have caused Singapore football to slide into a spiral heading south and downwards.

Anger needs to be directed at the right people.

IS THERE A PUBLIC PERCEPTION PROBLEM WITH SINGAPORE FOOTBALL?

The simple answer to the question is yes.

When there are former and current footballers who have indicated that all is not well with Singapore football (which is stating the obvious), imagine what would the general public be feeling.

There is also anecdotal evidence which indicates that some parents look at football as being dominated by one race, and stops their children from participating or being involved.

A detailed and in-depth survey and study needs to be done to address this issue of public perception so that a proper strategy can be put in place to reverse these trends and thoughts.

The only problem is that there is no indicator from the national football body as to whether it believes that there are serious issues with the sport which need fixing.

Yes, Singapore football has much to worry about but what is also necessary is that the anger is directed at the people in charge, and not at the players.