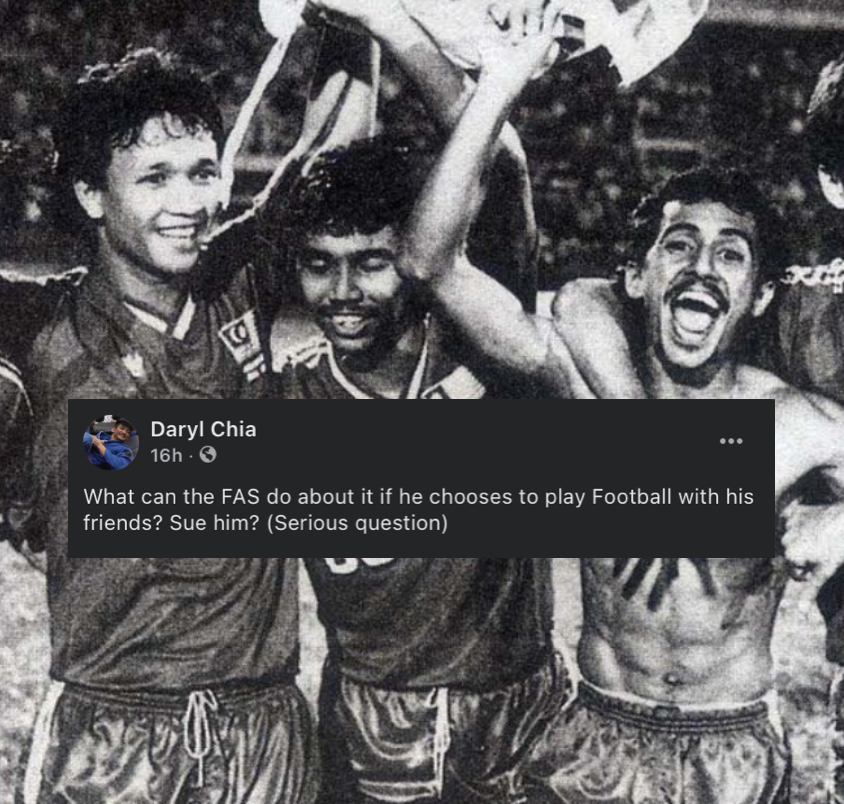 Football fans and general members of the public reacted with mostly shock to a warning to former national striker K Kannan by the Football Association of Singapore, in that he was not allowed to even take part in any football related activities, directly or indirectly.

The revelation was made in a Facebook post by former journalist Jose Raymond in a Facebook post, which also shared how lawyers from Eugene Thuraisingam LLP have now been roped in to push for Kannan’s lifetime ban from football to be lifted.

The post has been shared more than 430 times (as at 11am on 18 August) and the story have been carried on media platforms like Yahoo, MustShareNews and the Straits Times.

One commenter also asked for a petition to be started to have Kannan’s ban lifted.

Among the public comments made by people who have shared the post as follows.

There were also commenters who felt that there was a deeper issue with plagued National Sports Associations.

There were also others who wondered how far the FAS’ ban could reach.

More details about Kannan’s history which led to his ban could be found in this TMSG story.

He has been on the list of banned players since 1995. See image below.

One of the names on the list of that of Lutz Pfannestiel, a former Sembawang Rangers and Geylang International goalkeeper, who is now the Sporting Director of Major League Soccer side St Louis City.

A former international striker, Kannan represented Singapore at various Southeast Asian Games in the 1980s and was a squad member of the 1984 Singapore side at the Asian Cup which was held in Singapore.

He was also a Golden Boot winner with Kuala Lumpur FA when he represented the territory in the Malaysia Cup and League over two stints from 1987 to 1988 and then against from 1989 to 1991.