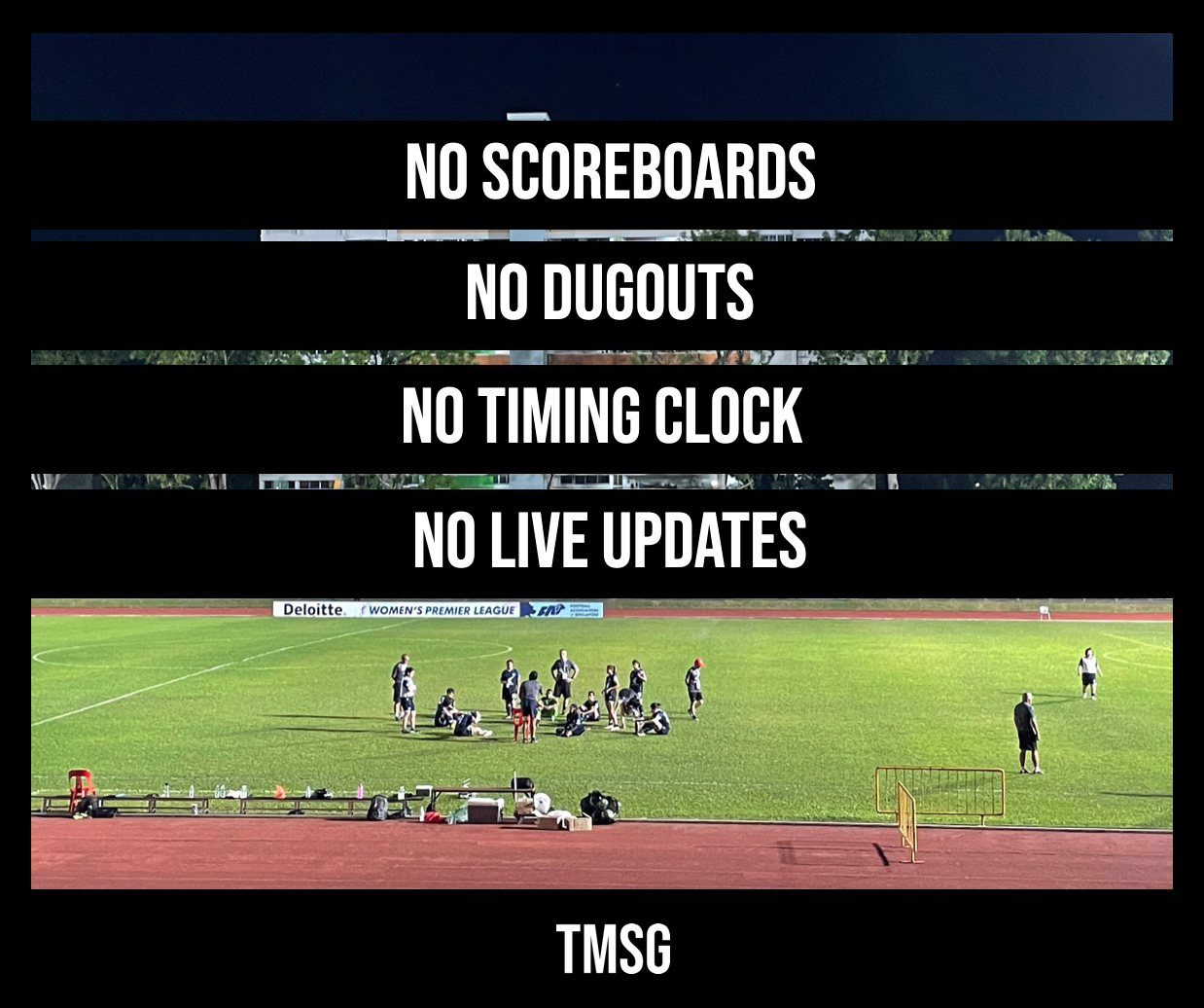 No dugouts for reserves and officials to sit on.

No dedicated use of the facility for competitive matches.

No, this is not a kick about between friends at the void deck or during a Sunday League match.

The shocking sights were witnessed by TMSG during a visit to the Yishun Stadium on 17 July for the match between Tiong Bahru and Tanjong Pagar United at the Yishun Stadium, now regarded as the “Home of the Women’s Premier League.”

Here’s a pano shot of the venue during the match.

He said, “I am so embarrased by the lack of respect shown to our women footballers.

A “Home of the Women’s Premier League” without scoreboards, a timing indicator, dugouts for reserves and officials, and having community users still waltz around the track while matches are ongoing is not exactly the kind of message which is consistent with pushing for gender equality and women’s development and empowerment.

What’s also worse, the both sets of teams remained on the pitch during the half time break for briefing and did not walk into the dressing rooms to regroup.

Tanjong Pagar United coach Samawira Basri took a red chair, the same ones used at coffee-shops, into the field of play and talked through tactics with his team.

Still, no one who were not in the venue knows what’s the end result.

As at 9am on 18 July, a day after the match, the final score between Tiong Bahru and Tanjong Pagar United was still not up on the WPL social media accounts.

Worse still, the result had not been updated on the FAS website as well.

When the 2022 edition of the WPL was announced on 4 May, Minister for Culture, Community and Youth Edwin Tong said the launch of the league was an indication of the strides Singapore had made “in the development of Singapore women not only in the sporting field but certainly in other areas as well”.

He added at the launch that women’s football was “on the cusp of something tremendous” and also add that that “we want to also promote women’s empowerment, leadership, and help in other areas to develop a sense of identity and achievement by pursuing new opportunities.”

TMSG hopes he sees the irony in his statements then to what the players are facing on the ground now, if compared to their male counterparts.

At the same launch event, FAS President Lim Kia Tong said that the football body had introduced a “more competitive format and structured support provided for the teams to elevate the standard of football for our local female players”.

At the recent ASEAN Football Federation Women’s Championship in Manila, Singapore celebrated after earning its first victory at the event after almost 20 years with a win over Indonesia.

Meanwhile, Philippines and Vietnam are through to the 2023 FIFA Women’s World Cup.

Thailand has already represented ASEAN twice in 2015 and 2019 at the World Cup and is also through to the playoffs for the 2023 World Cup.

Do you have any comments about this story? Write to us at hello@tmsg.sg