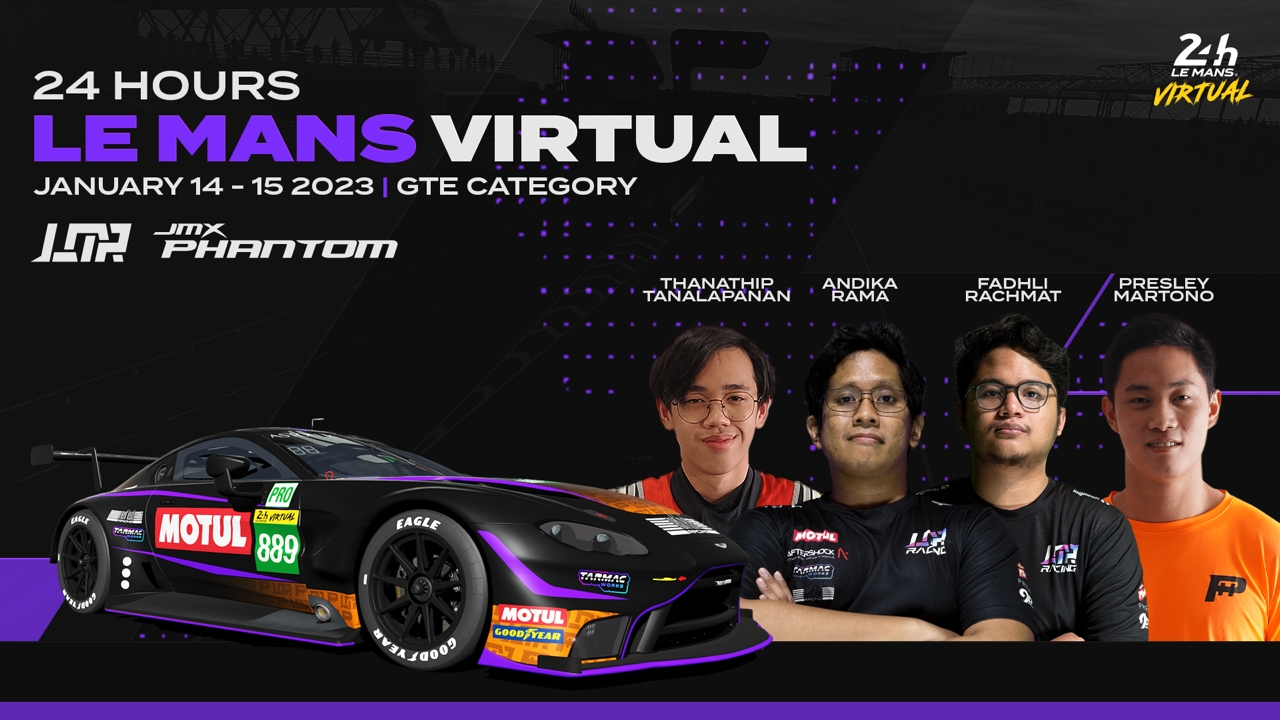 Singapore-based sim racing team Legion of Racers will be participating in the 24 Hours of Le Mans Virtual race for the first time in January 2023, the first Singapore sim racing team to take part in the prestigious championship.

In partnership with JMX Phantom, the Legion of Racers-JMX Phantom team will put up a line-up which is made up of Indonesians Presley Martono, Andika Rama Maulana, Fadhli Rachmat and Thai sim racer Thanathip Tanalapanan.

The team will not be able to field Singapore’s top sim racer based on the last two editions of the HyperDrive Cities championships – Dillan Tan – as he does not meet competition regulations.

The Le Mans Virtual is considered one of the most prestigious races in the sim racing circuit with the prize pool set at USD$125,000.

In 2022, the Le Mans Virtual also featured F1 drivers like Max Verstappen and Juan Pablo Montoya as the competition required the participation of real-world race car drivers and sim racers.

Said Indonesian Andika, the 2022 HyperDrive Cities champion, “The 24 Hours Le Mans Virtual race is one of the most prestigious in the sim racing circuit.

“It is an honour for all of us from Team Legion of Racers and JMX Phantom to be involved in the race, the first time a Singapore team has been invited to the competition.”

“The team is over the moon about being invited to participate and is looking forward to flying the Singapore and Indonesian flags high at the championship.”

JMX Phantom’s CEO, Founder and Driver Martono said that he was excited to participate in one of the most prestigious sim racing competitions in the world.

“However we won’t just be looking to participate, as we want to do the best job possible for our team and region,” he said.

“Thanks to Legion of Racers for making this partnership possible, as two leading organizations in the region, we will do our best to put Asia on the map at the race.

“A lot of hard work and preparation will need to be done before the race, but we are confident that we will be able to go up against anybody.”

The team will be participating in the GTE category, driving the Aston Martin Vantage GTE.

Apart from Andika who is the 2022 HyperDrive Cities reigning champion, Presley is a Formula 4 FIA Southeast Asian Champion in 2016 and CIK FIA European Formula Junior Vice Champion in 2015.

Thai Thanathip has been racing in the Thailand Super Series in the Supercar GT Class in 2022 while Fadhli placed third at the GT World Challenge Asia Esports 2022.

This story is powered by Legion of Racers. To put up a story, write to us at hello@tmsg.sg