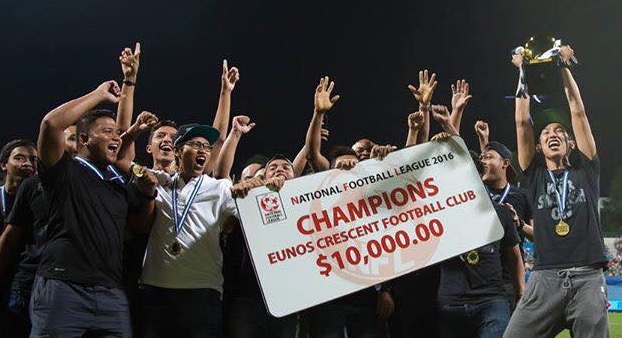 A grassroots club through and through, Eunos Crescent Football Club was founded in 1975 and has been around for 42 years now.

In 2016, Eunos Crescent were crowned champions of the National Football League (NFL), the second tier amateur league after the professional S.League.

For those who are unaware, the five clubs mentioned have all had opportunities to play in the S-League at one point or another over the last 15 years.

Sinchi, Liaoning and Sporting Afrique made the headlines for all the wrong reasons as well.

Sporting Afrique also made global news after it was discovered that they were playing their  players $100 a month. Yes, $100 a month.

Liaoning Guangyuan had players who were convicted of match-fixing while players from Beijing Guoan were involved in a street brawl in 2010 during a match against the Young Lions at the Jalan Besar Stadium.

Eunos Crescent’s chairman Darwin Jalil, who has helmed the club for the last two years is aiming high, and is dreaming big.

Like a pure football romantic fairytale, Darwin wants to match up against the S.League’s big boys.

He told The Monitor: “In terms of playing standards and fitness, there’s a difference between our level and the S.League at the moment. But we will look towards improving our coaching and playing standards to bridge that gap.

“But if we are given the same kind of support from the Football Association of Singapore (FAS) that other S.League clubs get, I’m confident we can overcome this issue.”

S.League clubs get between $800,000 to $1 million in subsidies from the FAS if they meet performance indicators.

And instead of having these subsidies be doled out to foreign clubs, it is only right that we help our grassroots clubs develop and succeed.

This is one way of growing the football eco-system at the grassroots level.

Eunos Crescent is a club with a history, and it is now helmed by a man with a dream.

It is imperative that the football administrators who helm the FAS recognise the importance of such grassroots clubs in the football eco-system, and to help them achieve their football dreams.

Isn’t it more worthy for subsidies and funding to be directed at local clubs such as Eunos Crescent so that they can be used to develop the capabilities of more Singaporean players, coaches, administrative staff and the like?

Dreams, like Darwin’s, can truly spark a football revolution at the grassroots like no other programme can.

And we are certain that fans of Eunos Crescent will not turn up at Jalan Besar Stadium for matches just because of the free nasi-lemak.