I’m still the man for the Lions: Sundram 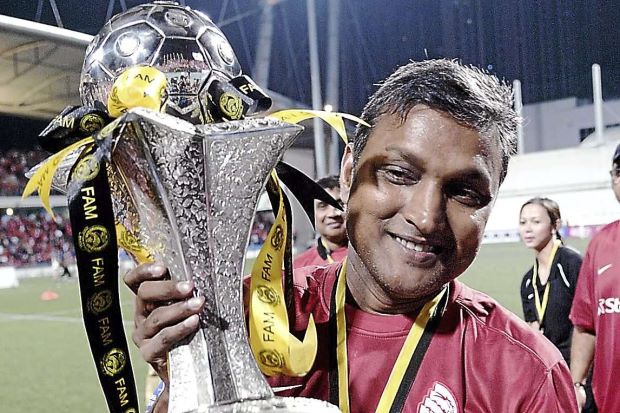 His national team may have only won twice since he took over as national coach in May 2016.

But Singapore’s national football coach V Sundram Moorthy still believes that he is the right man for the role of Lions head honcho.

In an interview with The New Paper, the former national striker said: “We played well against strong teams like Hong Kong and Turkmenistan in recent games. We can see the improved performances in the draws and narrow defeats. I believe if we go in this direction, the results will come.”

He added that he also has ” belief in my coaching philosophy.”

During this time, Singapore have recorded two wins – both 1-0 wins against Myanmar and Cambodia in matches which were played in Singapore.

The Lions were eliminated from the 2016 Suzuki Cup in a group which also contained Thailand, Indonesia and the hosts Philippines.

In the ongoing Asian Cup qualifiers, Sundram’s Lions have only managed two draws – a 0-0 away to Bahrain and at home to Turkmenistan. They lost to Chinese Taipei at the Jalan Besar Stadium and away to Turkmenistan.

While the Lions have a mathematical chance of qualifying for the final stages, it is unlikely that they will make the 2019 Asian Cup finals barring a miraculous change of fortunes.

Sundram led the LionsXII side to the Malaysian Super League title in 2013. He subsequently became the head coach of Negri Sembilan before heading back to lead Tampines Rovers in the S.League in 2016.