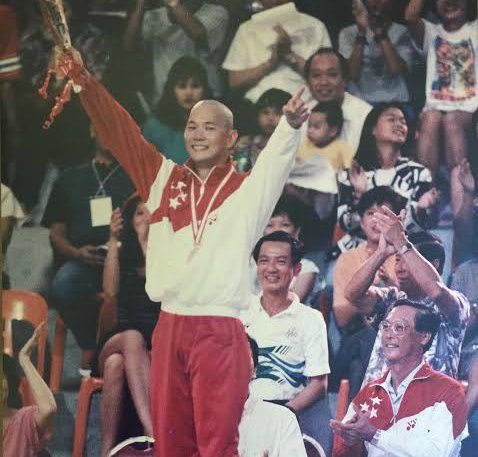 Singapore swimming legend Ang Peng Siong asserted that athletes should be allowed to decide when to retire and the decision should not be left to sports administrators in a Facebook comment.

The 55-year-old who once was the world number one in the 50m freestyle, was responding to the Football Association of Singapore (FAS) proposal that each S-League club should only have two to four players above the age of 30 out of the thirty players in each team.

Ang’s comment was in response to this Facebook post by the Vice-President (Partnerships) of the Singapore Swimming Association, Jose Raymond, who called FAS proposal discriminatory and deplorable.

Ang shared his own experiences as he became a senior athlete and indicated that sports administrators should stick to their role of supporting the sport.

He said: “Wanting to complete 1994 Asian Games Hiroshima as my swan song at the age of 32. Now, we see swimmers competing at a world class level in their 40s.

“Yes there will come a point for retirement but when is the appropriate age?

Sports administrators should not be the people to make such policies. What do they know if they have not done it? Have the players and coaches fraternity make that call. They are the people on the ground.

“I could have retired at 40 or 45! After which, I would still take coaching as a career path!
Let the athletes make that choice. Sports administrators role is to build that eco-system to support and promote the sport. Not hinder it!”

“If  someone who played the sport, someone who went on to become successful in the sports industry after retiring from football and believes the local football has the potential to become a billion dollar industry; wouldn’t the football leadership look into it and explore the possibilities? Why are they hesitating?”

This story was first published on The Independent.