Swimmer Glen Lim rewrites his own record in 400m freestyle. 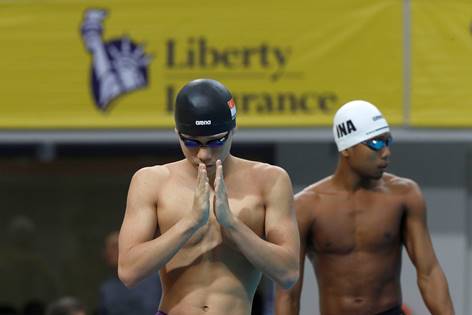 The 17-year-old from AquaTech Swimming (ATS) and Indonesian Fadlan Prawira Aflah went neck to neck in the Super Final and even though it was the Indonesian who touched the wall, Glen’s second place finish saw him clock a new National Record time of 3:52.64s.

The previous record of 3:54.12s was set by Glen himself in June of last year, at the Neo Garden 14th Singapore National Swimming Championships.

“I felt that it was a good swim, I just did everything according to plan and I was pushing myself to hit my goal for the race which was to hit 3min 53s and below. I was disappointed that I finished second but I cannot complain about it because I gave it my all”, said the Raffles Junior College student.

“We made sure that he went through his paces according to how we have planned it so far for the whole season, and he has been working hard on that aspect”, added National Training Centre (NTC) Assistant Coach and Glen’s coach, Marcus Cheah.

The new record time saw Glen meet the ‘A’ mark for the SEA Games and FINA World Juniors, as well as the ‘B’ marks for both the Tokyo Olympics and FINA World Championships.

In the Women’s 400m Freestyle, 16-year-old Gan Ching Hwee of Swimfast Aquatic Club (SAC) set a new personal best time of 4:16.42s, touching the wall first in the Super Final, and making the ‘A’ cut for the SEA Games and FINA World Juniors. Riko Oka and Rin Matsuzaki of Japan finished second and third respectively. There were also new personal bests for Ashley Lim and Chantal Liew of Singapore Swimming Club (SSC) in the same event, with times of 4:24.76s and 4:24.35s respectively.

Speaking after her race, the youngster said, “I wanted to break my personal best and I also wanted to go below 1min 09s because my aim was to try and qualify for the World Championships “B’ cut. I missed the ‘B’ cut but I broke my personal best so that is a really great achievement for me.”

In the morning heats, Gabriel Koo of Aquatic Performance Swim Club dropped the first record of the day when he broke Francis Fong’s U-14 100m Backstroke National Record that had stood for 6 years.