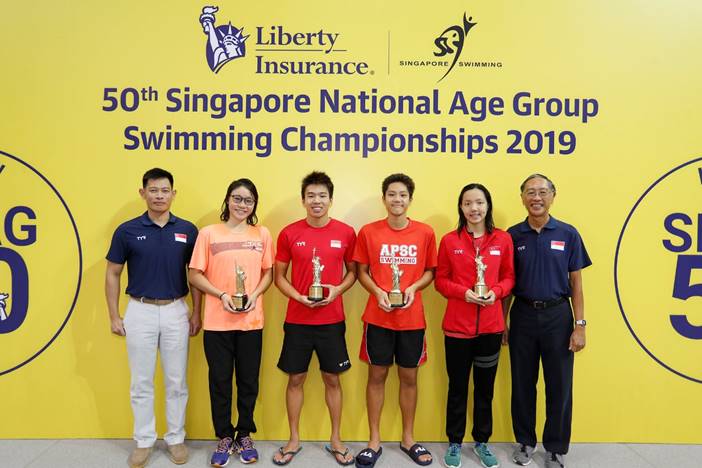 The final day of the Liberty Insurance 50th Singapore National Age Group Swimming Championships (SNAG) on Sunday saw the crowning of the Most Valuable Swimmers for seniors at the OCBC Aquatic Centre.

The 13-14-year-old category saw Ashley Lim of Singapore Swimming Club (SSC) and Gabriel Koo of Aquatic Performance Swim Club (APSC) win the Most Valuable Swimmer trophy, while in the 15-17 year-old category, it was Gan Ching Hwee of Swimfast Aquatic Club (SAC) and Jonathan Tan of AquaTech Swimming (ATS) that clinched the titles.

“To be honest, I was really hoping for an Olympic ‘A’ cut, so when I touched the wall and I saw the time and that I missed by a little bit, there was a tinge of disappointment, but I really felt very satisfied with my race and performance throughout the meet”, said the 16-year-old Methodist Girls School student.

Having become the first Singaporean to go under 55s and setting a new National Record in the Women’s 100m Freestyle earlier in the meet, Quah Ting Wen of SAC did it again in the 50m Freestyle.

The 27-year-old touched the wall first in the sprint in a time of 25:07s, smashing her time of 25.27s set at the China Life 48th Singapore National Age Group Swimming Championships in 2017.

Coming in second was SAC team mate Amanda Lim in 25:39s, while ATS’ Cherlyn Yeoh was third in a time of 25:62s. All three swimmers met the SEA Games ‘A’ cut.

“I’m quite pleased, it was my best time by quite a fair bit. However, I really wanted to see myself go under 25, so I spoke with my coaches so we know what to work on training.

“This meet has been a confidence boost for me, for a while it has been sporadic improvement here and there, so it was fresh to have a good few days of racing and it makes me feel confident about my fitness levels and I have definitely enjoyed myself this meet”, said Ting Wen.

Gary Tan, National Training Centre Head Coach, added, “The way Ting approached the meet and the way she swam it, and breaking records after records, it is very rare of a senior level athlete to do what she did, and we cannot deny the fantastic job that Leonard (National Youth Head Coach) and the rest of team has done with her.

“She is starting to see that age is just a number and through these performances she is able to see that there are many people really rooting for her.

“When an athlete sees the extra step that the coach puts in, it really pushes the athlete to perform better. Ting put herself out there and did a fantastic job.”

Jonathan and Teong both met the SEA Games ‘A’ cut, while Darren was just shy of the ‘A’ cut but well within the ‘B’ cut.

This year, being the 50th edition of the meet, the Singapore Swimming Association (SSA) introduced the SSA Club Challenge Cup, awarded to the SSA Affiliate based on the total amount of points scored by “local swimmers” in their respective age groups, where local swimmers includes swimmers with valid NRIC and FIN numbers, and the winner of the inaugural SSA Club Challenge Cup at the Liberty Insurance 50th SNAG went to Swimfast Aquatic Club.