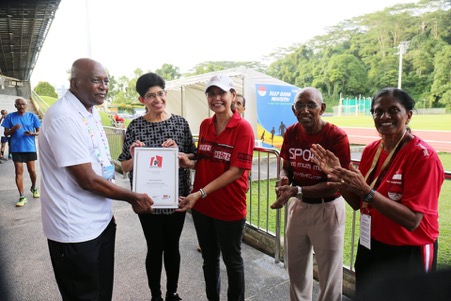 At least 11 clubs and affiliates of Singapore Athletics (SA) have filed an appeal with its President Tang Weng Fei asking for a realignment and to create an inclusive Masters athletics environment in Singapore.

The appeal was also sent to the Minister for Culture, Community and Youth Grace Fu and also included Member of Parliament Fatimah Lateef, who has been actively involved with the Singapore Masters Athletics (SMA) association. She is its advisor, according to the SMA’s website.

Separately, another Masters athlete – Christina Tay – has also filed a complaint to the SA over how she was treated over email by an office-bearer from the SMA.

In addition, a public petition which was started which has garnered more than 800 signatures as at 13 August.

According to the appeal, the crux of the matters revolves around SMA’s handling of the Masters community in track and field in Singapore. Anyone who is not actively competing as a professional or as a competitive athlete can be labelled as a Masters athlete and typically can involve anyone from the ages 35 onwards.

The SMA is helmed by former sprinter Glory Barnabas and its secretary is also another former athlete A Kannan.

But the person in SMA who has apparently caused a bit of consternation among the Masters community is its Deputy President Samuel Veera Singaram, who has been described in the appeal as “offensive and insulting” and has been putting up Facebook postings which have riled up the community.

Veera is not known to be a former athlete but has also spent time as a technical official of Singapore Swimming Association (SSA). It is understood that he was also involved in multiple issues with the management team of the SSA while he was an official there.

The same Veera was also involved as a volunteer of Tampines Rovers FC in the early 2000s.

In a report found in The Independent Singapore, he is said to be a former civil servant from MINDEF and Corrupt Practices Investigation Bureau. This is not verified.

One of the points in the appeal indicates that SMA has acted contrary to the underlying principles and ethos of participation at the Masters level by introducing qualifying marks and criteria for selection to events like the Asian Masters and World Masters.

Another charge in the appeal is that the SMA has been controlling and is non-consultative and has not had any consensus building in its decision making, insisting that it alone will make the decisions and set standards for participation. The SMA also disallowed Masters athletes from travelling with their spouses to the Masters events.

All of these announcements have been made by Veera, whom athletes say got involved in SMA’s administration at some point in 2017-2018.

There is also a charge that Veera’s role as Deputy President is unconstitutional as the role is non-existent in the Constitution of the SMA, which brings about an issue of governance of the association.

In a reply to the New Paper on 13 August, Veera said “SMA has been strictly told by our adviser to refute all allegations. We will reply accordingly to the parties in the next few days and hold a press conference to address the matter.”

According to the appeal which has been filed, the SMA is also not allowed to create a role and co-opt anyone to the role as only someone who has been a member for 5 years can be co-opted into a role which is laid out in the Constitution.

This story was first carried in The Online Citizen