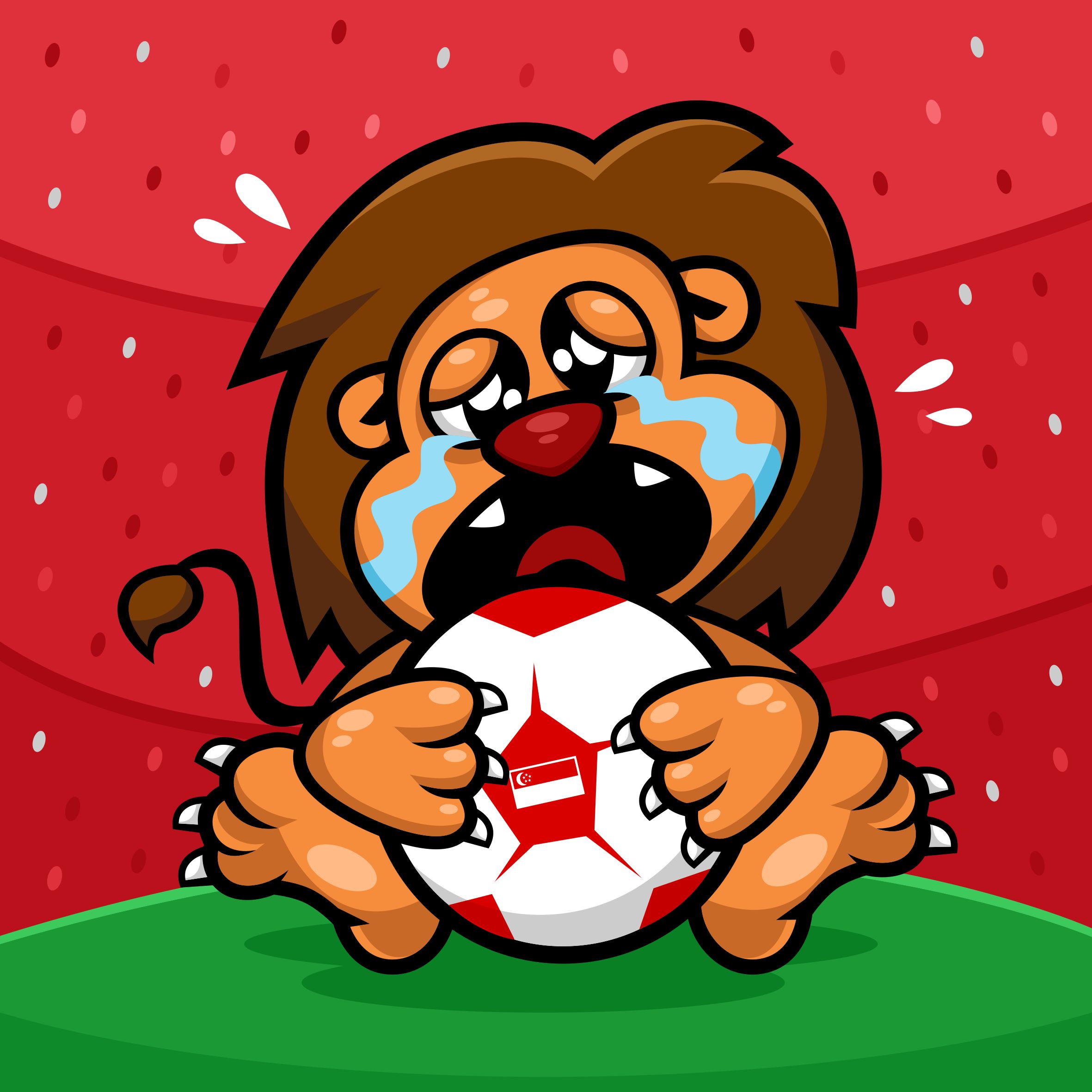 So, Singapore aims to make it to the football World Cup again, this time with 2034 set as the light at the end of a very dark tunnel.

A national project, both the Football Association of Singapore (FAS) and the Ministry of Culture, Community and Youth (MCCY) announced in a joint announcement last year after an initial snafu.

Let me take you on a Singapore football journey which spans slightly over than 20 years.

“Maybe if we change our immigration criteria to bring in top football talent and make them citizens, then one day we too can get into the (World Cup) finals.”

These were former Prime Minister Goh Chok Tong’s words, back in 1998 at his National Day Rally delivered on 23 August 1998, even before Singapore lifted the Tiger Cup, some two weeks later in Hanoi on 5 September 1998.

While discussing the need for Singapore to embrace foreign talent, former PM Goh spoke of the possibility of Singapore also succeeding at the world’s greatest football stage, just like the French did that year at the World Cup finals.

Full text of his speech at his 1998 Rally here.

Singapore in the World Cup, without having the Lions having even won the gold medal at the Southeast Asian Games, a biennial regional event which sometimes resembled a ‘kampong’ games.

A medal which has eluded the likes of Quah Kim Song, S Rajagopal, Dollah Kassim, David Lee, Fandi Ahmad, V Sundram Moorthy, Baihakki Khaizan, Hariss Harun and hundreds of other Singaporeans lucky enough to have donned the Lions jersey since the SEA Games competition began since 1959.

It was also a way for the Government to have Singaporeans embrace foreigners in our midst, and for them to help us win football’s greatest prize.

The announcement somewhat stirred the football fraternity, and made former Minister and then Football Association of Singapore (FAS) president Mah Bow Tan the chief striker in PM Goh’s first eleven.

A super hero of global football standing was sought to help steer the Lions towards the South Africa greens by 2010.

Alex Ferguson, some suggested. Venables, others had hinted.

But in came unknown bespectacled Dane Jan Poulsen whose claim to fame was playing a part as assistant to Denmark’s 1992 European championship winning manager, and whose first words to the media on 1 October 1999 when introduced were “I am no Superman”.

Apart from getting into a fisticuff with then national coach Vincent Subramaniam while on a training tour, he then led Singapore to an ignominious 4-0 defeat at the National Stadium in 2002.

The move to have Singapore qualify for the World Cup in 2010 led to talents being naturalised, just as PM Goh had suggested in his speech and the Lions morphed into a face which many Singaporean football fans were not so accustomed to.

An Englishman, a Croat and a Brazilian were inducted into the halls of the national team.

By then, the SEA Games had been turned into an under-23 tournament, and Singapore still had not won the gold medal yet, unfortunately, and after the 1998 Tiger Cup, the Lions failed to make the semi-finals of the 2000 and 2002 Tiger Cup tournaments.

After Poulsen, it was Serbian Radojko Avramovic who was roped in to lead the Lions.

And soon after, the Nigerians and the Chinese made their way into the Lions dressing room, and all we needed was another player from the Americas to make the Singapore team a truly global team from all continents.

The Lions, however, never made it to the World Cup finals and Associate Professor Ho Peng Kee, who succeeded Mah Bow Tan as FAS President, dropped the project and even labelled it as an albatross around the neck of Singapore football.

This was way before 2010, six years to be precise – and the Young Lions still had not won the SEA Games gold medal nor had qualification for the 2010 World Cup even started.

The Goal 2010 project was dropped like a tonne of bricks.

In place of Goal 2010, the FAS head honcho announced a Roadmap instead, and said that among the goals were for Singapore to be the top ranked ASEAN football nation, among the top 10 in Asia and must also qualify for the Asian Cup by 2009.

There were bright sparks along the journey though.

Singapore did win the ASEAN championship twice in 2004/2005 and again in 2007 but making it to the Asian Cup finals it did not, nor did it make it into the Top 10 in Asia.

The Lions, under Avramovic though, scaled heights never seen ever, apart from the Asean Football Federation championships in 2004, 2007 and again in 2012.

The Lions made it to the third round of the 2010 World Cup qualifiers for the first time ever under Avramovic, finishing third in a group of four teams which included Saudi Arabia, Uzbekistan and Lebanon.

The four teams from Asia which made the 2010 World Cup final rounds that year were Australia, Japan, South Korea and North Korea, with Saudi Arabia and Uzbekistan both missing out as well after Round 4.

In some way, PM Goh’s vision from 1998 was one step away from reality, but still, Singapore had not won the gold medal at the SEA Games.

In 2013, Avramovic left, Bernd Stange stepped in, as did technical director Michel Sablon, a Belgian who rode on his countrymen’s ascension up the football rankings ladder.

Both left with nothing much to show except for the fact that Singapore football had sunken far deeper into the football abyss, despite Sablon having proclaimed in 2015 that Singapore would be like Japan by 2020.

And still, Singapore had not won the gold medal at the Southeast Asian Games level, even though a task force had been put together, to ensure Singapore prepared for gold when Lion City hosted the event in 2015.

Another group stage exit, right in front of the home fans at the Jalan Besar Stadium meant that the Young Lions were not going to grace the National Stadium for the SEA Games tournament even though the event was being held in our own backyard for the first time since 1993.

And since 2012, the Lions have not made it past the group stages of the Suzuki Cup, while the Young Lions have failed to enter the knockout stages of the SEA Games football tournament since achieving a bronze in 2013.

The last time a Singapore team made the finals of the SEA Games football competition was in 1989 in Kuala Lumpur, when the team was made up of players like Fandi Ahmad, Terry Pathmanathan and David Lee.

An added point to note is that since the Young Lions started playing as a team in the S-League in 2003, Singapore has failed to make the finals of the SEA Games competition.

Our youth teams get smashed regularly at regional competitions as well.

So when the people in charge suddenly put together a project, which apparently is aiming for Singapore to qualify for the World Cup in 2034, don’t mind us for showing little belief or faith that the vision will materialise into anything but heartache and worse, a waste of financial resources.

There is so much which we need to ask ourselves, and especially the people in charge of charting the future of football.

Is local football the most followed spectator sport in Singapore?

Prove it with data, and not emotion, and not just based on spectators on seats.

For the record, running, swimming and cycling rank higher based on the Sports Participation Index.

How many schools in Singapore offer football as a sport?

What happened to the School Football Academies project which was announced by the FAS in 2017?

What is the plan to provide more opportunities for young budding footballers to take up football as a profession, especially since there are so few local clubs in the one-division, no promotion and relegation Singapore Premier League?

Does Singapore football still command the same feverish following as it did in the past?

Get a study done and ensure that the responses are given from a wide spectrum of society, which has seen great demographic changes over the last 20 years.

Do parents believe that their children will have a decent future in football as a career in Singapore and what will it take to have them do so?

Commission a study among parents who have children who are involved in football in Singapore, and those who aren’t and hear their thoughts.

Is football worthy of the taxpayers’ contributions?

How about investing more and developing other sports in which Asians have been known to excel at the Olympic level? Just look around the region and we can see which sports regularly serve up global medals for our neighbours in Malaysia, Indonesia, Thailand and Philippines.

Have the FAS administrators done enough on its own, to gather corporate support, to build the sport in Singapore over the last 20 years?

Check the FAS’ annual report for the answers.

How has the current management team fared based on its own manifesto released during the 2017 elections for office bearers?

What has been current technical director Joseph Palatsides’ contribution to Singapore’s football since arriving in May 2019 and what has he done to awake Singapore, the “sleeping football giant”?

These were his own words.

Is his blueprint for adoption by schools, youth clubs, academies to lift Singapore ready? Two years for a plan to be made available seems rather delayed.

Has the FAS explained what led to the failure of Goal 2010, the subsequent Roadmap, the national ambition to win the SEA Games gold in 2015 in Singapore and its current state of performance malaise?

It should, since both Mah Bow Tan and Ho Peng Kee have remained its advisors.

How much will Project 2034 cost the taxpayers?

The Chinese, with its 1.4 billion population, are aiming to become a football superpower by 2050 and have commissioned the building of thousands of academies; the Qataris and the Emiratis have spent billions to buy top European clubs just to learn from them; the Saudis have paid to have nine of their players placed in Spain; Singapore still insists on its best players serving their National Service commitments even if there is a chance to play in an English Premier League club.

In 2018, The Economist suggested that wealth, size and interest are factors which could determine countries’ football performances.

Singapore appears to only possess only one of three, and it is unknown as yet what the is level of interest in local football currently.

But while we do not possess the size, there are examples of countries which have made the World Cup despite lacking in size, like Uruguay (3.4 million), Trinidad and Tobago (1.4 million), Northern Ireland (1.9 million) and Iceland (356,000).

While it is fortuitous that Singapore now has people like billionaire Forrest Li of SEA Group and Shopee fame is willing to pour his money into helping steer local football, Forrest Li alone is not a sustainable solution to the failed society-driven Singapore Premier League club model, where some clubs are still known to pay players peanuts as former international Faritz Hameed recently highlighted in The Final Whistle podcast.

I would also argue that attitudes towards sports (and in this instance football) is an important component in ensuring success.

There are lots of emotional and sentimental reasons to support football, but let’s look at data, logic, facts and the track record and history of the sport instead.

Because as of today, Singapore has not won the SEA Games football gold medal despite having tried since 1959.