Powerlifter Matthew Yap worked at a Korean cafe, saved up to travel and then returned with a gold medal. He was only 17. 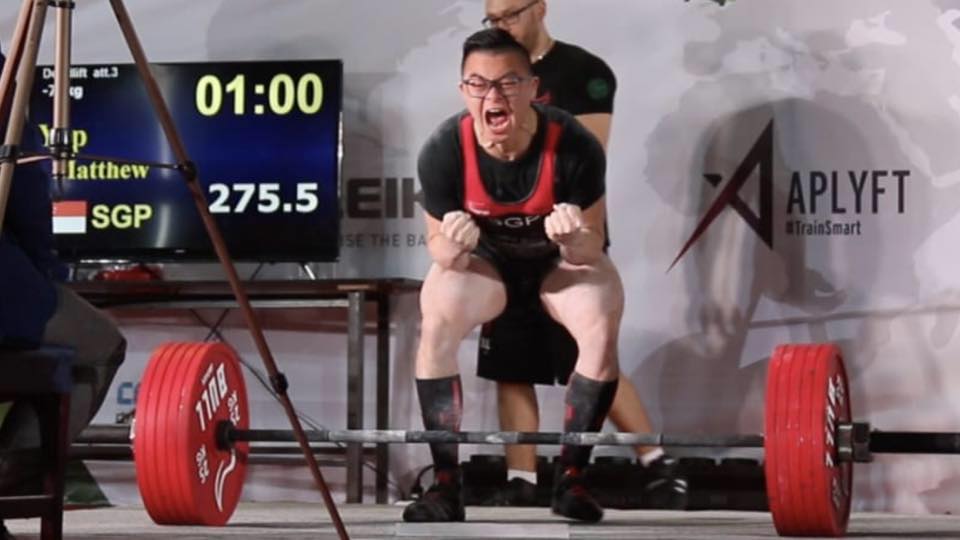 He was only 17 then and he had dreams of hearing the Majulah Singapura being heard as he received his gold medal.

So powerlifter Matthew Yap decided to do whatever he could to get on a flight to Minsk, Belarus to take part at the 5thWorld Classic Championships.

In an interview with tech firm Bluorbit as part of the Go Beyond Series which is produced by strategy firm SW Strategies, Yap who is now 22 recalled how he ended up waiting on tables just so he could represent Singapore at the world event.

The interview was also conducted alongside his younger brother Matthias Yap, also a powerlifter.

“I just completed my ‘O’ Levels and then I had a few months of holiday, it was two or three months,” he recalls.

“So I knew I was going to compete in the World Championships in June 2017.

“For the first two months of my holidays, I worked part time at a Korean café and saved as much money as I can.”

He said that he tried not to spend any of the money even on meals and his “non-existent social life.”

“It was quite interesting because after work, I had to go train.

“Sometimes my feet were sore from standing the whole day and then I had to train after that.”

But regardless, the working and then training became a routine.

“Obviously training would have gone better if I had more time to recover instead of standing all day, I guess that made the journey a lot more satisfying,” he said.

Working before the trip to Belarus was just half the story as he remembered.

“We landed in Belarus, it was a long trip from Singapore but we made it.

“I proceeded to the hotel, I was exhausted from the flight, I was three kilos overweight so from there I had to cut water by dehydrating myself and then going through the sauna to shed even more water to make the weight.”

He went on to describe how on competition night, he and his coach (also his elder brother Marcus Yap) “timed it just nice”.

“Once I was out of the sauna, I was ready to step on the scale, and then after that eat everything back.

“We had two hours and then competition starts, so we had to warm up and everything within that two hours and eat back whatever we can.”

But things did not go as planned as his body kept “bloating” and was not absorbing whatever he was eating.

“I don’t know if it was the nerves or what went wrong on that day itself, but it was just terrible and with your body not absorbing all these nutrients.”

“I cramped so bad that after my first attempt at the squat, I went backstage, I couldn’t walk, I was just there and I was panicking.

“Because I knew that I was gunning for the world record in that competition and having spent so much money and having gone through all the struggles to get that money to fly there and compete and it was really all or nothing.”

It was then that his coach decided to have Yap skip the second attempt so he had more rest, and to ensure he was not going to cramp up too much, and then go for the world record at the third attempt instead.

“And when I went onto stage, I just remembered it was all or nothing because if I made it, I got the gold medal and the world record.

“If I didn’t, I will end up fourth, not even a squat medal.”

He then said that heading out into the competition area was just loads of nerves and he was just unsure if his body could do what it set out to do.

“But I thought whatever it is, if I cramp up, it doesn’t matter.

“All I need to do is get the weight up so I went up there and fortunately for some miraculous reason I got it up.

“I remember racking the bar back and then turning around and jumping on my brother’s shoulders and we just ran backstage.

“It was very overwhelming and I took a second to process what had happened which was me breaking a world record.”

Yap obtained a Silver medal at a cumulative total of 555 kg which made him second in the world in the Under 66 kg, Sub Junior category.

He also broke his first ever world record in the Squat, setting it at 208kg which also gave him a Gold medal.

He finished off with a 130 kg Bench Press which earned him the Bronze and a 212.5 kg Deadlift.