Liverpool fan Indra Sahdan remembers THAT goal against Manchester United at the old National Stadium in 2001. 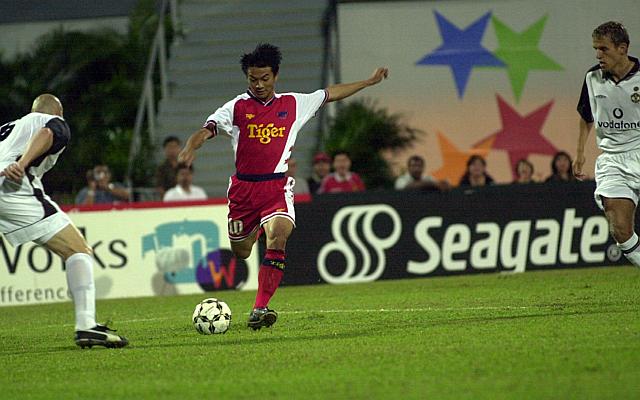 Regardless if you are a Manchester United fan or just a fan of football.

But for one Singaporean footballer, he will always be remembered very clearly in the Singapore football record books as having scored a goal against the mighty Red Devils in Singapore at the National Stadium when Sir Alex Ferguson and his Red Devils rode into town as part of their Far East Tour.

And in an interview with tech and logistics firm Bluorbit as part of their Go Beyond Series which is produced by strategy firm SW Strategies, the 42-year-old recalled how it felt to put a goal past the United keeper.

“The game against Manchester United in 2001 is one of the games where I don’t think I will ever forget.

“I actually really got a kick out of it because I am a Liverpool fan.”

Held at the National Stadium on 24 July 2001, Indra was only 22-years-old at the time and had already made his mark as one of Singapore’s hottest young strikers with then-Geylang United.

Indra’s goal came in the 38th minute, an equaliser after Solksjaer had given the visitors the lead early in the match.

He then took off his shirt and did a half-lap of honour around the fans who were seated behind the United goal.

Singapore however went on to lose the match 8-1, with United’s goals being scored through Solksjaer (twice), Dwight Yorke (twice), Phil Neville, Beckham, van Nistelrooy and Giggs.

The final score does not give Indra too many sleepless nights though, as he achieved something which no Singaporean player had done before – score against Manchester United.

“So when people ask me like that, I am proud to say that I scored against Manchester United team, which for me is one of the big achievements throughout my career,” he said.

Indra also looked back at his goals against Japan in 2004, and the Tiger Cup final second leg match against Indonesia which was held at the National Stadium in January 2005, in which he scored Singapore’s opening goal.

The Lions ended the tournament as champions that year, and Indra went on to represent Home United, Tampines Rovers, Sengkang Punggol and Singapore Armed Forces before retiring from football in 2016, after his final stint with Geylang International.