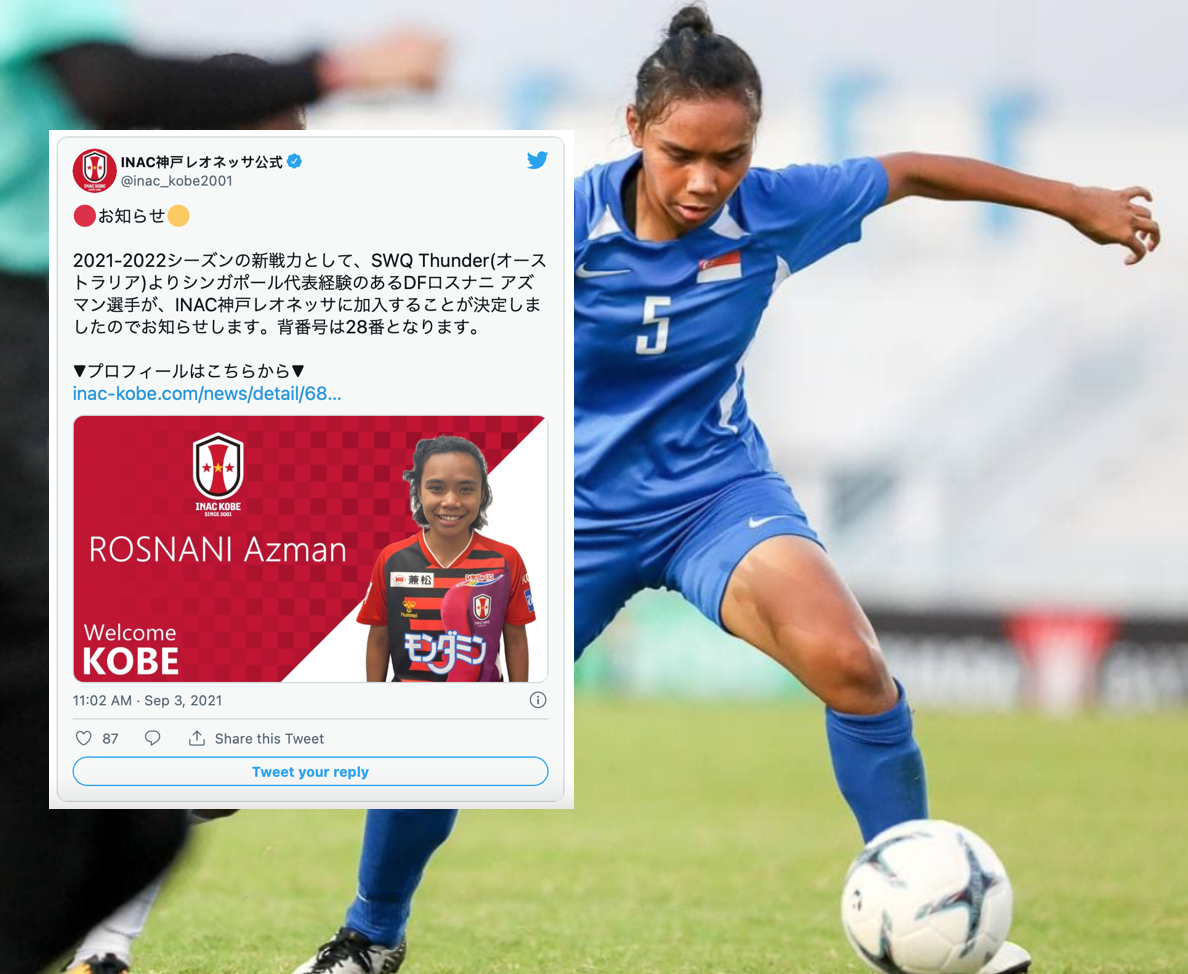 The 24-year-old defender has signed a one-season contract with International Athletic Club (INAC) Kobe Leonessa to play in the new Women Empowerment (WE) League, which starts on 12 September, the Football Association of Singapore said in a blog announcement posted on its website.

Rosnani said she was shocked to receive the offer, and added, “I am very honoured and thankful for this rare opportunity to train and compete in Japan.

“I believe this experience will push me outside of my comfort zone to grow as both a player and an individual.”

“I’m excited to gain experience in Japan where the standard of football keeps growing.

“It still feels like a dream, but I know that it will not be easy.”

Prior to the offer from Kobe, she made 31 appearances for Australia’s Southwest Queensland Thunder FC in the semi-pro National Premier League of Queensland after joining them last year.

Rosnani will be able to train alongside Nadeshiko Japan internationals Ayaka Yamashita, Emi Nakajima, Hina Sugita, Yuka Momiki and Mina Tanaka, who were part of Japan’s squad at the recent Tokyo Olympics.

Singapore’s National Women’s Head Coach Stephen Ng said It is a great feat for Rosnani to play in Japan and I am thrilled to see her efforts recognised.

“I hope that this will boost and spark hope for the Lionesses and that in time, more players will follow suit.”

Rosnani’s signing was completed with the help of the FAS as well as Albirex Niigata Singapore’s Shu Namba and Suzanna Foo, who connected her with the director of INAC Kobe.

Japan’s WE League was announced by the Japan Football Association in June 2020 in an extensive move to develop women’s football.

11 clubs will feature in the inaugural season and there will be no relegation for the first several years.

The league also requires that women comprise half of each club’s staff and officials.

INAC Kobe was previously part of the Nadeshiko League Division 1, which is now the second tier of women’s football competition in Japan.

The club won the league three times in a row from 2011 to 2013 and finished last season as runners-up. The likes of Japan stars Mana Iwabuchi (Arsenal FC) and South Korean internationals Ji So-hyun (Chelsea FC) and Cho So-Hyun (Tottenham Hotspurs FC) have turned out for the club in the past and all three now play in England’s FA Women’s Super League.

Rosnani also becomes the second Lioness to play for a professional club after Lim Shiya, who turned out for Australian side Perth Glory in the W-League in the 2008/09 season.