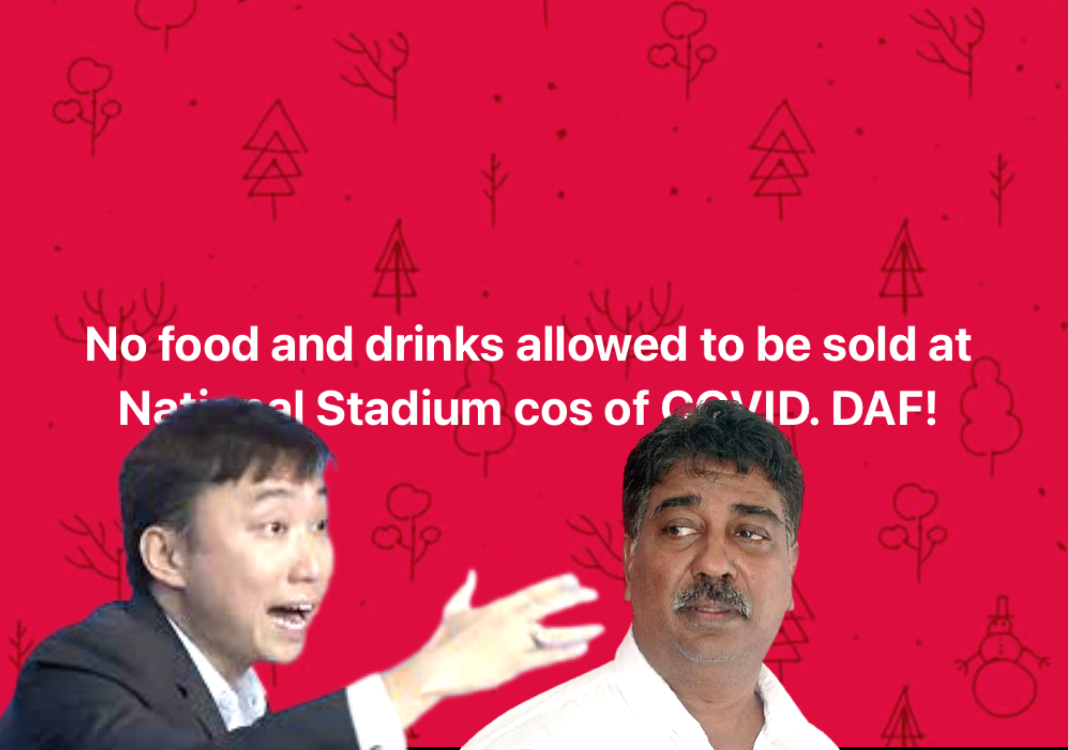 Former Nominated Member of Parliament Calvin Cheng has said on Facebook that the no drinks and no food policy currently in force at the National Stadium for the ASEAN Football Federation Suzuki Cup 2020 is “dumb as f**k”.

In a post which was put up at about 6pm on 10 December, Cheng said that “no food and drinks to be sold at National Stadium cos of COVID. DAF”.

DAF is widely accepted as the acronym for “dumb as f**k”.

Separately, the Straits Times Forum also published a letter by former Woodlands Wellington club manager R Vengadasalam, who said that he saw a man with young children being told that they were not allowed to bring their water bottles into the venue when he watched the opening set of matches on 5 December at the National Stadium.

In his 60s, Venga, as he is known to many, is a diabetic himself and said that he had to endure thirst and hunger for “more than 180 minutes”, even with his health issues.

At the ongoing Suzuki Cup 2020 competition which Singapore is hosting, football fans seated in the stands are not allowed to drink or eat during the match, and have to keep their face masks on at all times.

In two earlier posts, TMSG had made references to this policy for this tournament as it was noticed that some fans were drinking water from the taps in the toilet after taking a piss.

Cheng had been putting up posts about DAF rules which are still in place in Singapore after almost two years of living with a pandemic.

See his other posts.

In closing his letter to ST Forum, Venga asked for the authorities to allow drinks to be sold and also to let them fly their countries’ flags and banners and these would “help create a lively atmosphere for spectators”.

“Otherwise, they may as well sit at home and watch the games on TV,” he quipped.