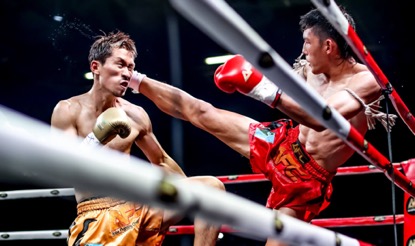 Both fighters will be battling for the 66kg title on the night and Ng and Amirul are both the main draws for the evening.

Said Ng, who trains under the Muse Fitness Club in Singapore, “This will be the first time that I am coming up against Amirul in the ring. What will make it even more challenging for me is that I will be facing him in his own backyard, where he will have the benefit of home support.”

Ng is regarded as Singapore’s Muay Thai poster boy, as he trains and tours the Muay Thai circuit.

He is looking to extend his winning run in the AFC after beating Choi Hoon of South Korea at the Marina Bay Sands last year.

The 24-year-old Ng, who also idolises Muay Thai superstar Buakaw Banchamek, will surely want to return to winning ways after slumping to a points defeat to another Thai fighter Trijak Sijomtrai in the All Star Fight in Hong Kong in May.

He is hoping that there will be a substantial Singaporean presence in Kuala Lumpur during the second edition of the AFC.

“I do hope to see many Singaporean flags in the stands during the fight on 21 September. It will not be an easy bout but I am looking forward to it,” he added.

Amirul, who is attached to the Malaysian Police, said of his opponent, “I am well aware of Brandon’s superior physical advantage especially in height, which means I will have to come up with a suitable tactic and apply it to the fullest to try and cancel out his height advantage.

“Though this will be my second appearance in this event, I am very excited to be fighting in front of my home crowd as I want to show the fans my true fighting qualities,” added Amirul, who has represented Malaysia twice in the Southeast Asian Games.

AFC is a new brand which presents a futuristic concept of Muay Thai featuring some of the world’s best kick-boxers as it aims to foster ties between the competing countries.

There are also VIP boxes which can accommodate up to 10 people for those who wish to experience the bouts in an exclusive setting.

Write to us at: opinion@themonitor.sg