No competitions but 23 women players have been selected for Asian Cup qualifiers. How? 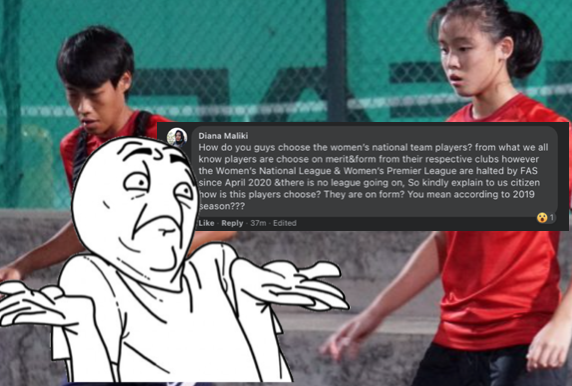 Netizen Diana Maliki asked a legitimate question on the Football Association of Singapore’s Facebook page when the final list of players was posted.

There’s been no women’s league football since the 2019 season ended.

While Ng said in a statement posted on the FAS website that “the team was formed with the perspective of planning for the future in mind” and that there is a “good mixture of fresh faces and seasoned veterans that we are tapping on”, Diana’s question is a legitimate one, especially if there were other players vying for slots on the team.

There are 11 Lion City Sailors players in the squad of 23, with the rests drawn from clubs like Police Sports Association and Tanjong Pagar United among others.

The Lionesses will also head to Asian Cup qualifiers without its foreign-based players.

In naming 23 players for the qualifiers which will be held in Tajikistan from 24 to 27 September, Ng had to leave out overseas-based Priscilla Tan, Suria Priya, Putri Nur Syaliza and Siti Rosnani Azman.

Tan and Priya are both in Australia, while striker Putri is in the United States of America, with Siti Rosnani only recently linking up with her new Japanese club INAC Kobe Leonessa in the Women Empowerment League.

Singapore will only have to face Indonesia over two matches in Group C, as both DPR Korea and Iraq have withdrawn from the competition due to the COVID-19 pandemic.

“We are motivated and keen on showcasing our best, after almost two years without competition,” she said.

“The squad has a great mix of talent and we are determined to play to our strengths and get the job done.”

Singapore is ranked 130th in the women’s rankings while Indonesia is at 95th in the world.

National coach Ng felt Singapore has a fair chance given it will just be two “finals” they are competing in.

“It is a new start for both countries as both Indonesian coach Rudy Eka Priyambada and I were appointed to our respective positions earlier in the year and have since reassembled our teams.

“It will be an interesting match-up as we meet them twice in the space of four days. I see it as playing two finals – we will give our all and take it one game at a time.”